Illegal Aliens Continue to Escape Deportation by Hiding in Churches

One of the immigration enforcement problems that’s still around is the situation of illegal aliens taking up residence in churches for the “sanctuary” they offer.

As it happens, the concept is fake —churches cannot set themselves up as mini Mexicos inside the United States, separate from American law. ICE officers could walk in any time and arrest the foreigners, but they don’t do so because they think it would look bad to have a Mexican moocher being dragged out with a priest squawking about the cruelty of la migra.

Many US citizens would cheer to see ICE arrests in the hypocritical churches, which are America-hating pro-Mexican institutions, but we probably won’t ever get to see that welcome sight.

Remember Elvira Arellano? She was the poster Mexican church lurker a decade ago, often holding her anchor-baby kid as a prop, as I imagined at the time to look like a ventriloquist set-up: 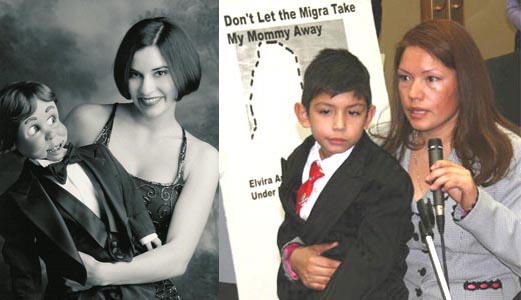 Fox News had a chat on the subject on Monday with Pastor Robert Jeffress who assured viewers that ICE could arrest the lawless foreigners at any time:

PASTOR JEFFRESS: I think our viewers are going to be surprised to learn that churches actually have no ability to harbor or offer sanctuary to people breaking the law. Right now, law enforcement officials can go into any church, any mosque, any synagogue and arrest those who are breaking the law, whether it be illegal immigrants, domestic terrorists or tax evaders; the only reason immigration officials aren’t doing that right now is they don’t think the optics wouldn’t look good of doing that, but right now they have the freedom to do that if they want to.

The Washington Times printed an article on Friday that precipitated the discussion:

Church World Services, a nonprofit based in New York that presses for amnesty and opposes much of President Donald Trump’s border crackdowns, knows of dozens of illegals who’ve sought sanctuary within America’s places of worship over the last few years.

Churches, in other words — at least some of them — have become an illegal’s best friend. And it’s hardly biblical; it’s hardly heavenly or humanly lawful.

From The Associated Press: “Amanda Morales sees her children off to school each day from the entrance of a gothic church, but she won’t even venture onto the sidewalk for fear of what may happen if she leaves the building where she has been a virtual prisoner for more than two months. Morales has been living in two small rooms of the Holyrood Episcopal Church at the northern edge of Manhattan since August, shortly after immigration authorities ordered her deported to her homeland of Guatemala.”

She ran to the church for safety; she’s since stayed in the church for protection from deportation. This is not a boo-hoo for Morales moment. This is a sad and outrageous reflection on how politically correct our churches have become.

And churches offering such protections are becoming more and more common in America, particularly as Trump’s Immigration and Customs Enforcement agency increases its enforcement.

Morales is just one example; her kids are legal, but she’s a fugitive and could be arrested at the drop of a hat. ICE, however, views churches as safe zones — “sensitive locations,” in fact — and won’t enter to arrest and deport.