Here’s the sort of normal horror that goes on more and more frequently because of open borders. An illegal alien thug broke into a 78-year-old woman’s apartment to rob the place and beat her so severely with a crowbar that she was left blind. 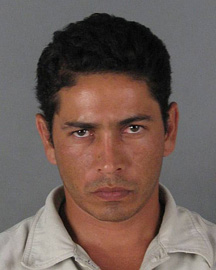 Jose Perez-Gonzalez (pictured at right) was convicted on Tuesday in Daly City, California.

A man has been convicted of charges that he beat and blinded a 78-year-old widow inside her Daly City home after she surprised him during a robbery attempt, a prosecutor said today.

Jose Perez-Gonzalez, 31, an illegal immigrant who was living in South San Francisco, broke into the woman’s home in the Serramonte neighborhood Jan. 12, 2008, by prying open a rear sliding-glass door. When the woman confronted him, Perez-Gonzalez beat her in the face with his metal pry bar, an attack that left her blind.

Police found the victim semi-conscious and near death after they responded to a silent burglar alarm. She now lives in a rest home. Her name has not been released.

Perez-Gonzalez was a tenant in a South San Francisco apartment building that the victim’s family owned. An acquaintance of Perez-Gonzalez telephoned the woman earlier in the day and posed as a package deliveryman to determine when she was going to be home, police said.

Perez-Gonzalez intended to burglarize the residence when no one was there, authorities said.

Police tracked him to his hometown of Guadalajara, where Mexican authorities arrested him in November 2008.

At least the Mexicans sent him back – we can be grateful for that.

An earlier report described the horror of the attack. . .

A brutal assault on a 78-year-old woman during a daytime burglary in an upscale Daly City home has left the victim in critical condition and prompted the city to offer a $10,000 reward for information leading to the arrest of her suspected attacker, police reported Thursday. [. . .]

She was bleeding profusely from massive blows to the face and the head – the victim of repeated strikes to the head with a crowbar, according to police.

Officials have identified a 28-year-old suspect in the attack.

”It was horrible,” said Daly City police Lt. Jay Morena. ”In my 28 years, I can’t recall anything similar – such a vicious attack on an innocent person inside her home in broad daylight.”