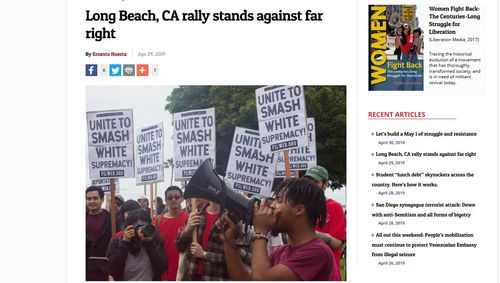 If Mark Steven Domingo Had Bombed The White Nationalist Rally, He Would Have Killed Mostly Antifa

I keep seeing headlines that say Hispanic Muslim plotter Mark Steven Domingo was trying to bomb a "Nazi rally." It's incredible that the MSM would call a rally a "Nazi rally" unless it were being held under the auspices of something calling itself the "American Nazi Party", but it isn't. Apparently some dissidents wanted to have a meeting in Long Beach, CA, and as soon as this was suggested, hundreds of antifa organized by the Party for Socialism and Liberation (PSL) with signs saying "Smash White Supremacy".

Organizers and community members gathered in Long Beach, California to counter a planned far-right demonstration. The so-called “Free Speech” rally was called for by the white nationalist group United Patriots National Front. This group brands itself as a pro-Trump “patriot organization,” but includes members such as Antonio Foreman, a self-declared Neo-Nazi who has served as security detail for prominent white supremacists. He most recently entered a church in Phoenix, Arizona, openly carrying a weapon, to disrupt the church’s legal housing of immigrant asylum seekers. The group’s members have a history of violence and hate speech, from their participation in the 2017 “Unite the Right” rally in which anti-fascist activist Heather Heyer was killed, to participating in an attack on Chicano Park in San Diego, a famous local park created and fought for by local Mexican and Indigenous people.

This group’s supposed president, the lesser known right-winger Drake Nighswonger, announced the group’s intentions to hold the “Free Speech” rally in Long Beach via a Facebook event page, which was almost immediately taken down. Rumors about the event’s cancellation began to circulate around the community, culminating in a phone call to the Long Beach Police Department where someone claiming to be the leader of the UPNF confirmed the event’s cancellation. Even so, police reaffirmed that they would be “heavily deployed” on the day of the event.

Anti-racist organizers in the community were quick to point out that many right-wing groups cancel their events in an attempt to dissuade an organized opposition from coming out. Leading up to April 28, organizers remained vigilant of any right-wing activity within the community. Many pointed to the a nearby pro-Trump march in Orange County’s Huntington Beach neighborhood, in which multiple anti-fascist organizers were arrested, as an indicator of the possibility of a similar rally happening in Long Beach.

In the morning, police surrounded Bixby Park, blockading the surroundings where the white nationalist were expected to rally at, while hundreds of counter-protesters stood parallel to them. In contrast to the insignificant number of white supremacists who finally showed up, the counter-demonstration continued to grow as the day went on, with even visitors to the park joining in.

There are no links in that, so I had to Google Foreman, who is just one guy attending a free speech rally. The SPLC said that Foreman's racism was proved by the fact that  while he was

...laid up in a hospital room in 2017, oxygen tube up his nose, gown wrapped around his torso, recovering from being stabbed nine times, Antonio Foreman found it in himself to recite the neo-Nazi mantra known as the 14 words.

“We must secure the existence of our people and a future for white children,” he said in an online video, ending the refrain with a big smile and his index finger pointing at the sky.

My first question was who stabbed him? Armenians, in what police insisted wasn't a hate crime, although the victims said that the Armenian with the knife said “I'm going to shank you, whiteboy!”. However, apparently, the local police feel this is just something Armenians do, without regard to race or color.

Then there's the story about Foreman entering "a church in Phoenix, Arizona, openly carrying a weapon, to disrupt the church’s legal housing of immigrant asylum seekers."

Of course, the claim that what the church was doing is legal is questionable, so I looked that up, too.

“You’re in violation of harboring! Federal law! Subsection thirteen twenty-four, A-one-A, a federal offense!” one PMAZ member can be heard chanting, according to video obtained and disseminated by the Southern Poverty Law Center’s Nick Martin.

Yes, that's what's called a protest, and the reference is to 8 U.S. Code § 1324. Bringing in and harboring certain aliens, which the church in question is probably violating. As for him being openly armed, that's perfectly legal in Arizona, so why not? (Especially if you're the survivor of an attack which left you stabbed nine times.)

However, the point again is that the numbers of organized Antifa shock troops who show up for one these events means that it's probably literally not possible to fire off a gun without hitting one, much less set off a bomb.