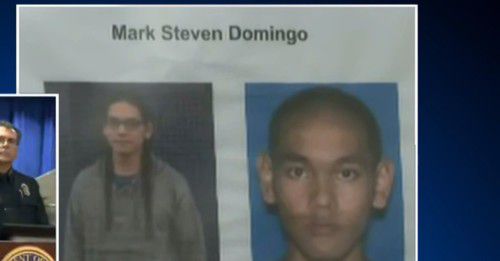 Mark Domingo: Hispanic Arrested For Plotting Mass Murder Of Whites Out Of Sympathy For Muslims

I don't know if Mark Domingo is a Mexican-American, or for that matter a native-born American at all. News sources seem to be focusing on his status as a former member of the US Army, a "California Man", and a resident of Reseda, California.

The point is that the FBI has apparently caught him planning a "mass casualty" event which he want to make of Las Vegas Massacre proportions against a white nationalist rally.

The Department of Justice announced Monday the arrest of a former U.S. Army infantryman who is accused of plotting a "mass casualty" terrorist attack at a white nationalist rally in Long Beach, California over the weekend.

Agents arrested the suspect, Mark Steven Domingo of Reseda, California, on Friday evening after an undercover source for the FBI sent the suspect what he believed was a live bomb that he could use to carry out his attack.

"This investigation successfully disrupted a very real threat posed by a trained combat soldier who repeatedly stated he wanted to cause the maximum number of casualties," U.S. Attorney for the Central District of California Nick Hanna said in a statement.

Law And Crime has this:

Federal prosecutors announced a criminal case Monday against U.S. Army veteran Mark Domingo. They said he planned on bombing a Nazi rally in California in retaliation for the mass shootings at two New Zealand mosques, according to The Associated Press. Authorities said that the defendant had converted to Islam and had combat experience in Afghanistan.

He was charged with providing material support to terrorists. Domingo bought nails and other parts for an explosive device, said an FBI agent in an affidavit obtained by the AP. The alleged plan was to set it off remotely. If targets survived, he’d launch assaults elsewhere, authorities said.

“There were mosque shootings in new Zealand,” Domingo posted to a private group online after the shootings, according to federal prosecutors. “[T]here must be retribution.”

Domingo allegedly added: “I feel like I should make a christians life miserable tomorrow for our fallen bros n sis in [N]ew Zealand…maybe a jews life…they shed our blood…no Muslim should have to experience this, a message needs to be sent.”

He’d allegedly been planning this since March.

Law and Crime was wrong to put "Nazis" in the headline, although I have no idea who was actually rallying.

Only one of the reports I see online includes the planned "white nationalist" victims in the headline, this one from Reuters:

So if all you read was MSM headlines you would not know that this guy was Hispanic and Muslim, nor would you know that he'd targeted white nationalists and Christians. 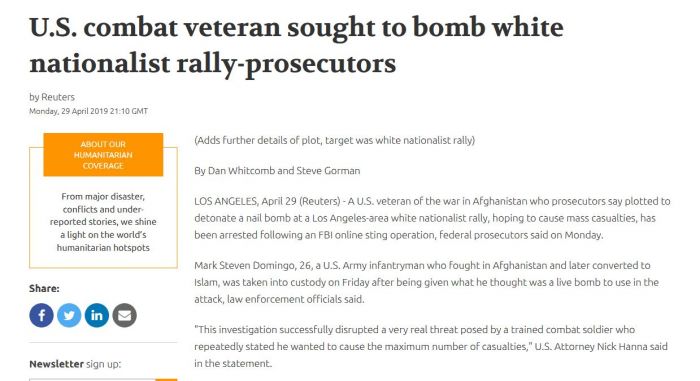 And the absence of such information is why we're unlikely to see much discussion about whose "rhetoric" is responsible for this.