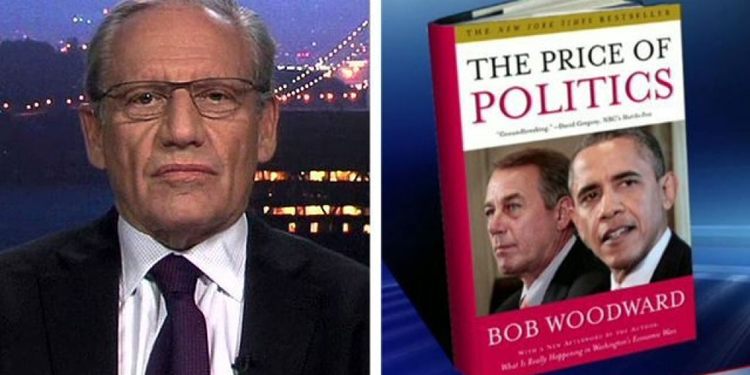 How The NYT Spins The Woodward Obama Book

Yesterday, Rick Klein's write-up for ABC News of the new book by Bob Woodward (of the Washington Post's Watergate fame) was full of lurid details from Democratic sources of President Obama's empty-chairness. It was not a welcome intro for Obama's big speech tonight. So, the NYT weighs in today with an account of the book as a predictable he said-he said account. Nothing of interest here, just move along!

WASHINGTON — A new book by the journalist Bob Woodward chronicles the descent of Barack Obama’s Washington into partisan trench warfare and mines the minutiae of the largely failed negotiations between House Republicans and the White House to tame the nation’s deficit problem over the last two years.

In details down to the gum chewed by President Obama (Nicorette) and the wine sipped by the House Speaker John A. Boehner (merlot), “The Price of Politics

” paints a portrait of dysfunction that began even before Mr. Obama was inaugurated and has only grown worse.

The book highlights problems that are well known in Washington, but Mr. Woodward manages to get the president, Mr. Boehner and their inner circles to talk about them. Mr. Boehner criticizes the rudderless leadership of the White House staff while President Obama maintains that the speaker never really wanted to cut a deal last summer when the two tried to negotiate a “grand bargain” to lower spending, raise revenue and increase the nation’s debt limit.

The book goes on sale next Tuesday, but The New York Times was able to buy a copy on Thursday from a retailer.

With the presidential election weeks away, the book will do little to reshape Mr. Obama’s image as a powerful man steering the government forward, but it is also unlikely to engender much support for Republican leaders in Congress who seem unable to control their members. ...

Last summer’s bitter budget negotiations have been hashed over in several lengthy news accounts and Mr. Woodward’s is the most exhaustive, although it is not clear how much new information, if any, he has uncovered.

He does make it clear they came tantalizingly close to a deal: “As other accounts have noted, a separate, bipartisan Senate proposal rocked the negotiations. There were signs of fractiousness in both the Democratic and Republican caucuses. Even if Mr. Obama and Mr. Boehner made a deal, it was not clear that Congress would pass it.

The ultimate problem, the book suggests, was a lack of leadership by both Mr. Boehner and Mr. Obama.

Mr. Boehner said that none of Mr. Obama’s staff — including William M. Daley, then his chief of staff — were “steering the ship underneath him.”

“They never had their act together,” Mr. Boehner tells Mr. Woodward. He added: “It’s not that they’re bad people. But there’s no structure.”

High-ranking White House officials laughed off Mr. Boehner’s criticism, saying that Mr. Boehner was the one who did not steer his own ship, a view Mr. Obama also seemed to ascribe to.

“I think John wanted to get a deal,” Mr. Obama said in an interview with Mr. Woodward. “And I think that, had he had more control of his caucus, we could have gotten a deal done a month earlier.”

The need to make Obama boring has been a priority for the press ever since Obamamania evaporated.