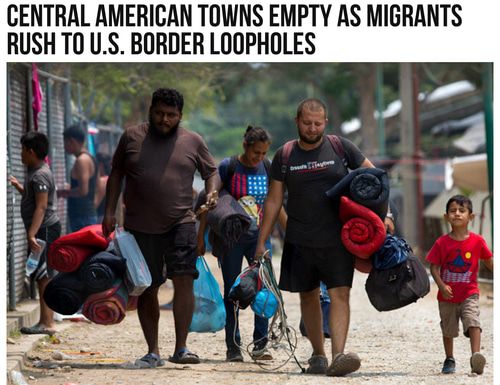 Guatemala's towns are emptying out as a growing number of migrants head north to accept the Democratic Party's offer of open-border loopholes and low-wage jobs, say a growing number of local reports.
Central American Towns Empty as Migrants Rush to U.S. Border Loopholes, by Neil Munro, Breitbart, May 20, 2019

Yes, except I wouldn't blame it entirely on the Democrats.  The GOP has done its part to allow this situation.  And the Trump Administration seems helpless.

Roughly one percent of Guatemala’s population has migrated to the United States’ border since September 2018, according to the Department of Homeland Security. That adds up to roughly 170,000 migrants, and roughly one-third of those migrants come from the neighboring rural districts of Huehuetenango and San Marcos.  The result of these U.S. government policies is that many villages are with empty homes, fatherless families, absent men, and minimal investment.

Yes, and that creates more poverty,  which is used as further justification to allow the emigration to the United States.

The article quotes Sara Carter, who visited a village in Guatemala and was told by a resident that 60% of the town had left.

How many Guatemalans want to go the United States?

A recent survey by U.S. and Guatemalans shows that roughly one million Guatemalans — plus many of their children — want to make the trip soon.

The way things are looking now, who's going to stop them?  They don't fear Trump anymore, and Trump's administration exudes helplessness.

"Entire communities are losing their children — and their future — to migration,” said a report from the non-profit Pulitzer Center. The report delicately dances around the reality that progressive Democrats and judges offer the catch-and-release loopholes to the migrants who bring their children.

Successful migrants frequently display their success by using wages from U.S. jobs to build U.S.-style houses in the home village. The status display pressures other locals to make the journey.

According to a report quoted in the article

The hybrid dwellings aren’t even necessarily designed to be lived in. Sometimes, “the house is like a trophy to show to the rest of the village,” ... The building may sit empty... while the family members remain in their more traditional homes—or else family life is clustered in just a few rooms of the new house, leaving the rest barren.

The pressure to migrate is boosted by cellphones, which allow migrants who walk through the catch-and-release loopholes into the United States job market to display their new wealth to the young men and women whom they left behind.

According to Daniel Reichman, who is "associate professor and chair of anthropology at the University of Rochester":

People in even the most remote corners of Central America now have phones and internet devices, allowing them to communicate with their relatives abroad to facilitate the migration process.... Technology makes the world smaller, and it makes migration a more viable option than it was in the past. Borders can’t contain technology, and people now evaluate their circumstances in Central America against what they imagine they will encounter in the United States.

Does this really help Guatemala in the long run?

Guatemala’s huge migration — and the corrupt local government — deter foreign investors from creating new factories and jobs in the poor country. The investment rate has dropped from roughly $1.3 billion in 2014 to roughly $1 billion in 2018.

The Guatemalan government does little to stop the migration, partly because the nation’s economy is aided by huge remittances from the United States. The remittances brought in $9.3 billion in 2018, so muffling public opposition to the nation’s poor government and lack of economic development.

American migration enthusiasts show little concern about economic and civic wreckage in Central America caused by the U.S policy of allowing large-scale illegal migration — except when the wreckage can be used to justify more migration.  In fact, the economic chaos caused by Democrats’ easy-migration policies is used by Democrats to justify to their refusal to close the borders against what they insist is a “humanitarian ” emergency.

It's a vicious cicle, and a humanitarian disaster.

It's time for President Trump and his administration to get control of the border, by hook or by crook, and stop making excuses.