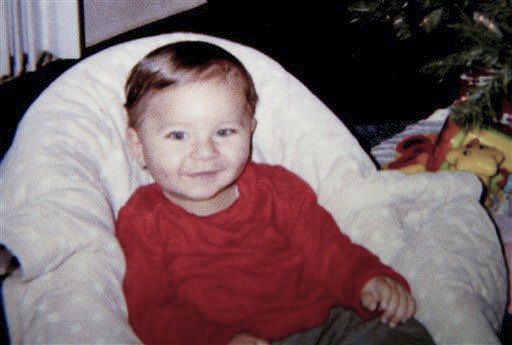 His Name Is Antonio Angel Santiago: As Nation Deifies Ahmaud Arbery, We Remember the 13-Month Old White Baby Murdered in His Stroller by Two Black Males in Brunswick, Georgia in 2013

The entire nation is fixated on the unicorn of white-on-black crime in Brunswick, Georgia (Ahmaud Arbery, some black dude with a long rap sheet, the only person to work out/jog in jean shorts since John Cena stopped wrestling full-time).

But no one will dare point out what happened in 2013 in the same city, when two black males murdered a 13-month-old white baby in his stroller.

His Name is Antonio Angel Santiago, a 13-month old white baby with the “bluest eyes” you’d ever see. No national outrage. Barely a local story even in Georgia. Not one white athlete Tweeted out their outrage over this story.

His Name is Antonio Angel Santiago.

MARIETTA, GA. – Lawyers made opening statements Tuesday afternoon in the trial of a man accused of shooting a baby to death in his stroller with attorneys predicting the case would last all week and possibly part of next week. An indictment accuses De’Marquiese Elkins, 18, of shooting 13-month-old Antonio Angel Santiago to death and wounding his mother, Sherry West, on Brunswick street in a failed armed robbery attempt. Several of the women jurors were visibly shaken when prosecutors began showing crime scene and autopsy photos of Antonio bundled in a jacket, mittens and knit hat lying lifeless on a stretcher with a bullet wound between his eyebrows.

Elkins’ attorney Kevin Gough was unsuccessful in getting Glynn County Superior Court Judge Stephen Kelley to disallow the photos. Jurors stopped taking notes when the photos appeared on a giant computer screen across the courtroom. One dabbed her eyes. Prosecutors say Elkins murdered Antonio when he and co-defendant Dominique Lang, 15, came upon the child’s mother Sherry West pushing the stroller. They assert Elkins carried out a threat to shoot Antonio and then shot West in the leg when she refused to give up her purse. The defense argues that West and the child’s father, Louis Santiago, conspired to murder the child for a life insurance payout. However, the first Brunswick police officer on the scene, detective Angela Smith, said West was crying hysterically, “Save my baby. Don’t let him die.”

West was shot in the leg and complained her left ear had also been shot. Smith said West was upset when the detective told her the child was pronounced dead at the scene. Smith also testified that both parents tested positive in a gunshot-residue test, adding that the two were holding hands in the hospital emergency room before the test. An emergency medical technician testified that Antonio could not be revived at the scene. Georgia Bureau of Investigation medical examiner James Downs testified that the single gunshot was made from 2-6 inches away because of the gunpowder burns around the wound.

“Given the course that the bullet took through this child’s body, this death would have been instantaneous,” he said. ”…There was no surviving this injury.” Gough tried four times to ask Downs if there was a less painful or more merciful way to kill someone. Kelley prohibited it, but the doctor did say lethal injection and electrocution could be as quick and painless. Earlier, jury selection was marked by a dispute over the racial makeup of the panel, with the judge rejecting defense objections that African-Americans were improperly excluded. But a statistician testified Tuesday there is a 200 to one chance of random selection yielding a jury with no African-Americans in the murder trial of a Brunswick man accused of shooting a baby to death in his stroller.

Atlanta statistician Jeffery Martin, who frequently testifies for defendants, testified Tuesday morning before lawyers made their opening statements and prosecution witnesses laid out the grizzly details of the case. “What the statistics are telling us is that there’s something other than random going on,” Martin said. “You simply can’t expect a young black man accused of murdering a young, white child anywhere in America not to object,” said Gough.

Gough told Kelley that he didn’t know why procedures used in Cobb County to select jurors resulted in a jury that has no blacks. But, he argued that it is a violation of Elkins’ constitutional right. The case was moved to Cobb County because of massive pre-trial news coverage in Glynn County. A Cobb jury administrator, Debra Mathews, testified that the three potential jurors who showed up late for duty Monday – one white man, a white woman and a black woman – were too late to be in the 48 available for Elkins’ trial. She also testified that people who had been allowed to miss jury duty for previous Cobb County trials were put at the head of the line for consideration in Elkins’ case. Mathews said she couldn’t say if those people were more likely to be white. Kelley has allowed Gough to make his case about the jury makeup, but he hasn’t been swayed. Kelley noted that a computer randomly picked those called for jury duty and then shuffled those who answered their jury notices. “It’s not even random once, but it’s random twice,” Kelley said. In the end, Kelley seated the Cobb jury of 12 and three alternates. Two of the alternates were black women. Among the 15 jurors and alternates are nine men and seven women. Two of the men are fluent in Spanish, and several of the planned witnesses are Spanish speakers. One of the Cobb County jurors lived in Brunswick for a year. Because Elkins was 17 when 13-month-old Antonio was killed in March, the state cannot seek the death penalty. Lang is being tried separately because he is supposed to testify against Elkins. Being tried with Elkins is his mother, Karimah Aisha Elkins, 36, who is accused of tampering with evidence and making false statements to police. An indictment says she and her daughter, Sabrina Elkins, who will also be tried separately, threw the .22 caliber gun used in the shooting into a saltwater pond and gave lied to police about her son’s whereabouts at the time of the shooting. The trial resumes Wednesday and is expected to last into next week.

His Name is Antonio Angel Santiago, a 13-month old white baby with the “bluest eyes” you’d ever see.

And yet you are told, on a daily basis, America is a nation dominated by white supremacy, white racism, implicit bias, structural racism, and one where black people are hunted down the moment they leave their house (h/t LeBron James for the last point—did you ever find out who wrote racist graffiti on your home, King James, or was that a lie, too?).

Were America a nation where "white privilege" existed, the name Antonio Angel Santiago would be taught to every school child, instead of Emmett Till.