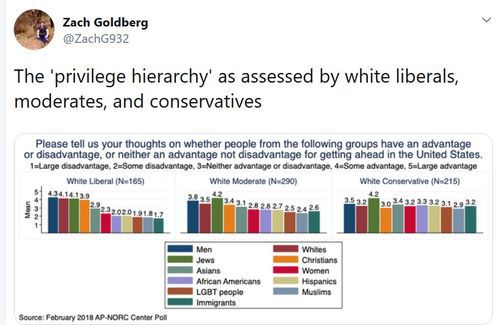 Survey: Jews Don't Get as Many Intersectional PoCemon Points as Many Jewish Liberals Might Guess

The 'privilege hierarchy' as assessed by white liberals, moderates, and conservatives pic.twitter.com/aJ7018mU5n

So all three political persuasions of whites–liberals, moderates, & conservative– see Jews as being considerably more “privileged” than the average?

Is today’s incessant media discourse about “privilege” really as good for the Jews as many Jewish media personalities tend to assume? Maybe it would be tactically prudent to tone down the “White Privilege” rhetoric because it leads a lot of people to think about “Jewish Privilege” as well?