It has now become a multicultural must to step on Christmas by never mentioning it except in connection with other “holidays”, notably Hanukkah, aptly described by American Heritage's Frederic Schwarz (December 2000) as the “Jewish Kwanzaa.” Somehow, however, the MSM neglects to provide the nearest Saint's day in the Christian calendar to each year's Rosh Hashanah, Yom Kippur andPassover—there are a lot of saints! So it has become a VDARE.com service (as so often) to fill the gap. 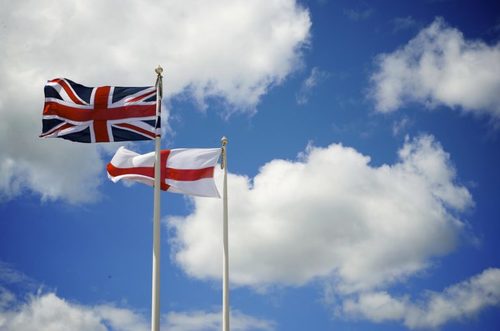 St. George is of course the patron saint of my native England. Returning for a visit over twenty years ago, I realized, when I saw how the the flag of St. George (the red cross on white field modeled by the young lady above) had totally replaced the Union Jack, that something was going on. There's a reshuffling of the deck there, ultimately induced by immigration, that may well eventually extend to the rest of the Anglosphere.

Oh, and Passover began at sundown.

VDARE.COM wishes all our readers a Happy. We mean it.