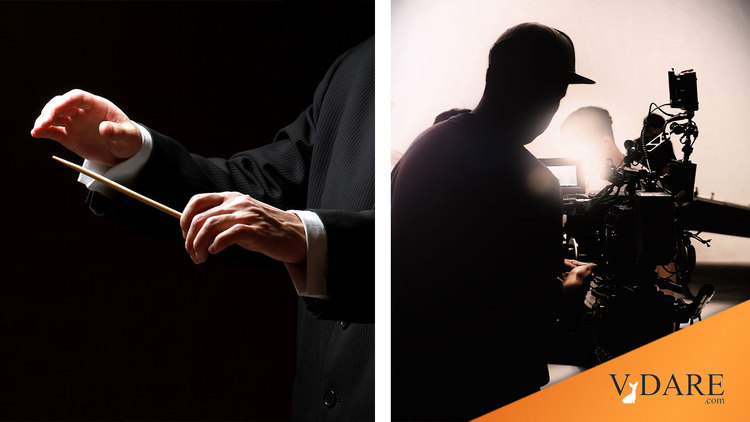 Have Any Composers Become Film Directors?

In the past, the great orchestral music composers like Beethoven were titans of culture. Today, individuals with skills at complex orchestral music such as John Williams are still much in demand to score films.

Movies are, more or less, the Total Art dreamt of by Wagner. On the other hand, he would have been surprised that the composer is a servant, typically called in late in the process to augment the existing work.

Composing the music for movies is a really good job. Still, it’s paid work rather than being the boss. In contrast, it’s hard to imagine Mozart, Verdi, or Wagner deferring to their librettists or the directors of their operas.

In opera, the composer is The Man. But in movies he is not.

Sure, there are examples of directors deferring to their composers, such as Sergio Leone letting his scenes drag on to accommodate the late Ennio Morricone’s wonderful compositions.

But still… Has any movie soundtrack composer become a director? I can think of directors who composed scores, such as Charlie Chaplin, John Carpenter, and Clint Eastwood. But have any film composers gone the opposite direction and said, “Okay, I know a lot about how movies work now, and I’ve become expert at manipulating audience emotions, so it’s time for me to broaden my purview by directing?”

It’s common for screenwriters to become directors, and it’s not uncommon for actors and producers. A big part of being the director is giving confidence to the crew and cast by acting like you deserve to be the leader because you know what you are doing. Actors (e.g., Eastwood, Gibson, Redford, Affleck, Redford, etc.) have a lot of experience at pretending to know what they are doing in movies, so not surprisingly they tend to be pretty good at pretending to know what they are doing on movie sets as well.

But have composers ever become directors?

More broadly, have composers ever become the dominant figures on a movie?

Nominally, the director is The Man in films. But in reality, it’s not always like that. Film critic Richard Grenier was a close observer of auteur theory vs. auteur reality. His widow told me that when they were in Paris in the 1950s when her husband was in Navy Intelligence, they used to alway see Truffaut and Godard sitting in the front row at the Cinémathèque raptly chain-smoking.

In 1986, Grenier used to illustrate his alternative to the Truffaut-Godard auteur theory an anecdote from the brief period in the 1980s when Alan Alda, newly retired from MASH, was on top of the world in the movie industry:

When Bill Conti, composer of the scores of the Rocky series, was called in to do a fresh score for The Seduction of Joe Tynan, the first movie written by and starring Alan Alda, he thought he had best deal prudently with the film’s director and presumptive auteur, Jerry Schatzberg. What had Schatzberg disliked about the first attempt at a score? he asked. “Oh, I liked it fine,” Conti reports the director as saying. “Alan didn’t like it.” “Then what am I doing talking to you for?” the musician replied somewhat bluntly. “Let me see Alan.”

For contrary to the popular understanding of this new “auteur theory”—and it being Hollywood, not Paris—Jerry Schatzberg, the director, was not the lord of all he beheld on the set of The Seduction of Joe Tynan. …

In today’s Hollywood, a place of essentially independent productions, the “power player” on a movie set is the person in whose name the money has been raised. This is usually a leading actor or actress, who occasionally also directs. It is often a powerful, creative producer. And only now and then is it a glamor director. …

But almost never a film composer.

I presume the exception is Broadway musical composers. For example, when the studio bought the rights to Phantom of the Opera, it granted Andrew Lloyd Weber “total artistic control.”

I think it was not uncommon in the distant past for songwriters, typically lyricists, to become movie studio executives in charge of musicals.

I suspect a number of rock stars played key roles in the look of their music videos from the 1980s onward. My vague recollection is that it was considered a good idea to let 1970s rock stars make movies, but the results proved so dire that the experiment was forgotten.

In case you are wondering, Koyaanisqatsi, which introduced audiences outside of NYC to composer Philip Glass, was very much not the idea of Glass, but of the director and cinematographer who’d spent a decade collecting their footage.

Still, the idea of film score composers (rather than songwriters) coming to dominate a movie sounds to me like something that might actually work someday. I could imagine some composer becoming the auteur of a hit movie (and it becoming a huge fad that flops badly as it proves to be sui generis).

On the other hand, lots of people, such as film encyclopedist David Thomson, believe in the auteur theory that the director must be The Man for reasons of the primacy of the visual over the other senses:

Always, it is the visual sense that indicates the author, because it is the sharp point that pricks our senses.

Perhaps. So maybe the lack of an exception to the rule is proof that the visual always reigns supreme in film?