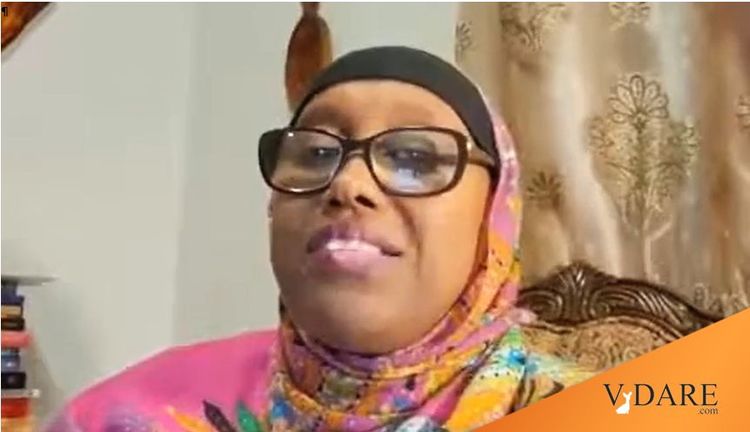 Get prepared to see more Somali refugees head for the U.S. Congress. If two Somali women become members of Maine’s House of Representatives, it might not be long before they seek federal office, and we have two more hijabbed Africans running in the halls that were once the province of such as Lee and Davis, and Crane and Dornan.

This morning, the @sunjournal reported that my opponent believes "Muslims should not be allowed to hold public office."

Asked for comment, I told the paper the following:

A Somali called Mana Abdi will soon be elected to represent the voters of the 95th district in the state’s House of Representatives because the white Republican inexplicably pulled out:

Fred Sanborn-Silvers, who once posted on Facebook that Muslims “should not be allowed to hold public office,” withdrew from the race Aug. 18, according to the Secretary of State’s office. ...

It is not clear why Sanborn-Silvers quit the race.

After his social media posts blasting many Democrats and women politicians, including U.S. Sen. Susan Collins, R-Maine, became public in June, he kept a low profile.

But Abdi won’t be alone. The mayor of South Portland, Deqa Dhalac, another Somali, wants to occupy the 120th District House seat to “be a voice in Augusta for immigrant communities”:

If elected, she said she would work to try to ensure women’s rights, including abortion rights, and help immigrants, asylum seekers, and the homeless.

[Mayor Deqa Dhalac is vying for a seat in the legislature, by Alex Wells, Portland Press Herald, July 21, 2022]

Let’s hope the white GOP candidate in that race, Michael J. Dougherty, doesn’t pull out, too.

If my opponent did that, he would know that Article VI says that "no religious test shall ever be required as a qualification to any office or public trust under the United States."

Abdi didn’t know what indoor plumbing was, much less a constitution, until she landed here. Sanborn-Silvers was right, although he probably doesn’t know why. The Harvard Law Review explained 15 years ago:

The Founders understood the No Religious Test Clause to prohibit tests forcing individuals seeking certain public offices to bind themselves through an oath or affirmation to a particular religious belief or sacrament in order to be qualified to hold office. They did not understand the clause to prohibit government officials from considering or even inquiring into an individual’s religious beliefs — assuming the individual is not under oath during the inquiry — in deciding whether to nominate, confirm, or vote for the individual. Indeed, the ratification debates suggest the opposite, that government officials should consider religious beliefs in making such decisions.

[Supreme Court Justice James] Iredell stated that “it is never to be supposed that the people of America will trust their dearest rights to persons who have no religion at all, or a religion materially different from their own.”

[An Originalist Analysis Of The No Religious Test Clause, April 1, 2007]

So maybe Abdi, not Sanborn-Silvers, needs to learn something about the Constitution.

Now, take a look at Dhalac.

Let’s hope this Muslim duo don’t make it further than Maine’s House. If voters keep sending Somali “refugees” to Capitol Hill, Congress will look a lot less like a serious legislative body and a lot more like a North African bazaar full of rug and goat stew merchants.