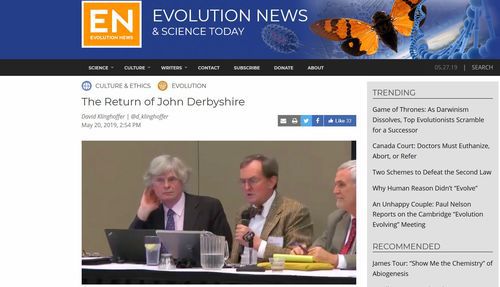 David Klinghoffer Responds To Derb, And It's "Like Being Savaged By A Dead Sheep"

From the most recent Radio Derb: In last week's Radio Derb I ventured some mild remarks about creationism, for the first time in many years.

Well, whaddya know: Creationists are still around. I got a small email bag on that segment. I shall deal with it—patiently and politely, of course!—in my monthly diary. Here I just want to note a response from the Discovery Institute, the creationist think-tank over in Seattle, still in business apparently.

This response was from David Klinghoffer, whom I remember very dimly from across the editorial table at National Review. The gist of it is that I am a hatefully hateful person full of hate, and that this is the fault of Charles Darwin in some way I can't be bothered to figure out.

Whatever. What came to my mind when reading David's remarks was one of those witty exchanges we used to get in Britain's parliament before it filled up with bores and hacks. The exchange took place in 1978 between Dennis Healey, a scrappy, sharp-witted bloke serving as Chancellor of the Exchequer (i.e. Treasury Secretary) and Geoffrey Howe, an exceptionally courteous and mild-mannered fellow serving as shadow Chancellor.

The milquetoast Mr. Howe had offered some long murmured critique of Healey's economic policy. In rebuttal, Healey told the house that being criticized by Howe was   "like being savaged by a dead sheep."