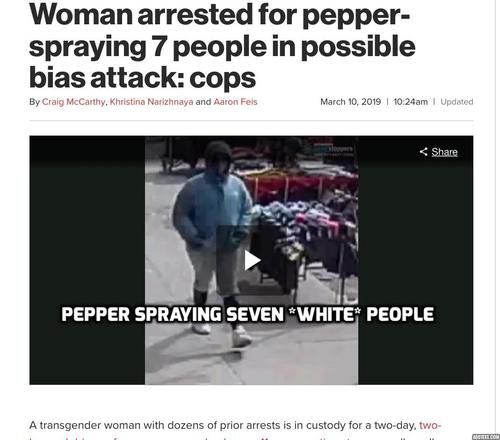 A one-individual Coalition of the Fringes has been arrested in the latest NYC hate crime. From the New York Post:

Thomas Heard, whom a high-ranking police source said identifies as a woman, first sprayed a 29-year-old man in Harlem on the southbound side of the 125th Street station on the A/C/B/D lines around noon Friday and ran, cops said.
As Heard headed west on 125th Street, she sprayed five more people — a 47-year-old man, and four women, ages 48, 38, 30 and 23, police said.

Then, about an hour later, she sprayed a 30-year-old woman on the southbound platform at the 96th Street 1 train station, police said.

Throughout her alleged spree, Heard, 37, made anti-white statements, cops said.

… Heard was busted Saturday afternoon near that street’s intersection with Crotona Avenue for kicking and threatening a woman with a sharp object, and pepper-spraying her boyfriend, police said.

She had pepper spray and a pair of scissors on her when she was nabbed, cops said.

Heard — who has been arrested 65 times since Jan. 2002 for charges including prostitution, assault on police, grand larceny and fraud — was awaiting arraignment Sunday morning on a slew of charges, including assault, menacing and harassment as a hate crime.

My latest Taki’s Magazine column, “LARPing Hate,” a book review of Wilfred Reilly’s Hate Crime Hoax, explains why I’ve come around to believing that it makes sense to add on hate crime charges in the case of wholly gratuitous crimes like this that wouldn’t have happened without demographic animosity aforethought.

Of course, the ACLU seems to believe it’s not a hate crime if the aggressor Punches Up.