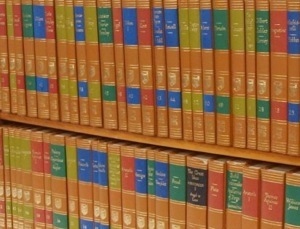 Great Books—Who Wrote Them? And Who Can Say?

Wendy Smith reviews A Great Idea at the Time, Alex Beam's book on the Great Books series, in the Chicago Tribune,[November 15, 2008] and describes the 1990 relaunch of the series at in a time of burgeoning political correctness like this:

The program had a good run before sales "fell off the cliff" in the 1980s. Beam marvels that Britannica and Adler, the only surviving member of the triumvirate, decided to relaunch the Great Books in 1990, "the very moment that the Western canon and 'dead white males' in particular were under siege." ("Did anyone look out the window?" he asks.) He tartly assesses the "underwhelming" changes made—a few really obscure Greeks eliminated, a very few female authors added — and winces over 88-year-old Adler's maladroit claim that "there are no 'Great Books' by black writers." No wonder it was a disaster.

In fact, that's not what Mortimer Adler said — he said that there were no "Great Books" by black writers before 1955, which was the cutoff date for the "Great Books" series, which was intended to put books that were actually Great in people's homes. The problem is that there by definition there are no"Great" books written after 1955, because we won't know if they're great for some time, and before that few blacks (and few women—the 1990 revision added Jane Austen) wrote at all. Of course, according to Charles Murray, there may have been few "Great Books" written after 1950, by anyone, but that's different problem.

Saul Bellow became notorious for having said ''Who is the Tolstoy of the Zulus? The Proust of the Papuans?'', [Chicago's Grumpy Guru, By James Atlas, New York Times Magazine, January 3, 1988] in response to the Western Civ brouhaha at Stanford, which is the assault on "Dead White European Males" that Beam thinks Adler ought to have been paying attention to. This is just common sense, but that one sensible remark is still remembered against Bellow. [Bellow's remarks on race haunt legacy in Hyde Park, By Azam Ahmed, Ron Grossman, and Tribune Staff Reporters, Chicago Tribune, October 05, 2007]

And what happens to a professor who isn't a Nobel Prize winner  like Bellow, or an internationally known philosopher like Adler? They get the message and conform, or they get sued.