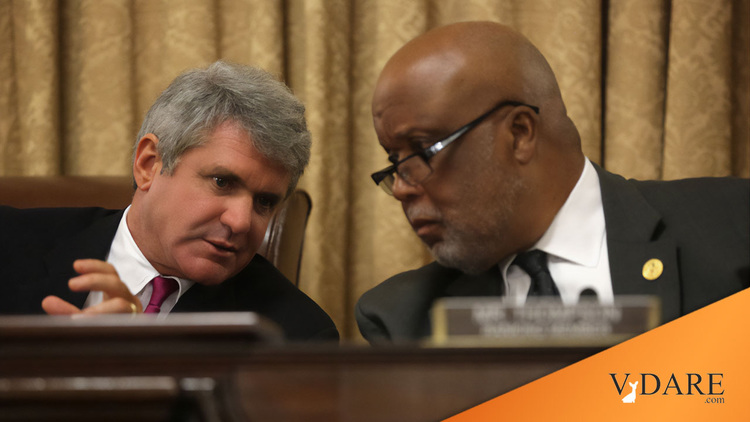 Revolver.news really is fulfilling the role of the pre-sellout Drudge Report. Their eagle editorial eye lasered through the characteristic MSM murk of The agency founded because of 9/11 is shifting to face the threat of domestic terrorism, by Nick Miroff, The Washington Post, February 15,  2021 to identify the key elements:

Both of these headlines merely linked to the story above, but they convey the message.

Rep. Bennie Thompson, D-Miss., chairman of the House Homeland Security committee, has long insisted that the DHS should protect Americans from the gravest dangers they face; domestic extremists and white supremacists, he said, present the most urgent, lethal threat.

Thomson is a viciously anti-White Black Supremacist. He particularly distinguished himself in 2016 by rushing to wild and incorrect judgment on a church burning: see Another Fake News Hate Hoax Exposed: Black Church Burned By Church-Burning Black.

Mike McCaul, R-TX, is actually a far worse case. In this Washington Post article he called for

“…specific federal sanctions for domestic terrorism, potentially applying the same penalties as exist for terrorism that originates overseas. Such legislation could include penalties for providing material support to domestic groups, as well as laws holding technology companies responsible for violent and extremist content on their platforms.

"It sends a strong message about where Congress is that we're going to treat domestic terrorism on an equal plane as international terrorism," McCaul said.”

We should be clear about what is in gestation here: an anti-white Police State. Jared Taylor saw this coming in The Coming Purge—Are We All "Domestic Terrorists" Now?

“White Supremacy” is an extremely elastic term. Since Charlottesville is has become blindingly obvious that justice in America is hopelessly skewed to the left and against White Patriots. Supporting Trump is about to become a crime.

Bennie Thompson and his Masters are trying to create a Police State. Why is Mike McCaul helping them? Can’t he think?

Apparently the Trump vetting process was not totally useless: #NeverMcCaul - Trump Meets With Homeland Security Candidate Who Would Throw His Presidency Away

Needless to say McCaul at B in the Numbers USA rankings worst in the Texas GOP delegation except for the despicable Senator John Cornyn (C+). No less than 14 colleagues rank above him.

Immigration rankings are the acid test for a wide range of crucial issues.