Germans March Against Islam; Politicians And Their Pet Reporters Are Furious 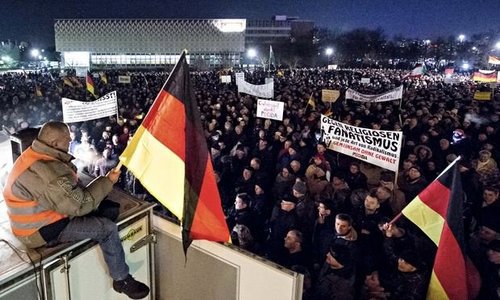 Even in Germany, perhaps the most repressed country in the European Union (next to Sweden), Europeans are fed up with the Islamization of their country and are taking to the streets.

Its members have been dubbed the “pinstriped Nazis” and they refer to their demonstrations as “evening strolls” through German cities. But on Monday night, an estimated 15,000 people joined Pegida, or Patriotic Europeans Against Islamisation of the West, in a march through Dresden carrying banners bearing slogans such as “Zero tolerance towards criminal asylum seekers”, “Protect our homeland” and “Stop the Islamisation”.

Lutz Bachmann, the head of Pegida, a nascent anti-foreigner campaign group, led the crowds, either waving or draped in German flags, in barking chants of “Wir sind das Volk”, or “We are the people”, the slogan adopted by protesters in the historic “Monday demonstrations” against the East German government in the runup to the fall of the Berlin Wall.

More fair and balanced reporting from Kate Connolly follows, with much talk of "Nazis," the "far right," and the other usual tripe.  The media's fear reflects the optimistic facts on the ground — this movement is now beyond their ability to control or shame.

Politicians are animated by the same fear.  After all, modern democracy is all about the politicians telling the people what they can and can not think.

Germany's Justice Minister Heiko Maas, a leading figure in the centre-left Social Democrats, has called the movement a disgrace for the country.

Chancellor Angela Merkel has condemned all forms of xenophobia and stressed that Germany needs immigrants to help it cope with a looming demographic crisis resulting from one of the lowest birth rates in Europe.

But she is also keen to avoid alienating voters that might ordinarily support her conservatives. Some are already leaving for a new party, the Alternative for Germany (AfD), which was founded last year in opposition to the euro currency but now talks tough on immigration and law-and-order issues.

Expect the AfD to get the same kind of hostile treatment that UKIP receives in the United Kingdom.  After all, as Steve Sailer put it, "In today's world, it’s the duty of the media to comfort the comfortable." And who is more comfortable than the governing class of the European Union?