Those Swedish [IMMIGRANT!] Shootings And Our Lying Main Stream Media

See also Turning Our Backs – It’s Time For Patriots To REALLY Break With The Main Stream Media, by James Kirkpatrick 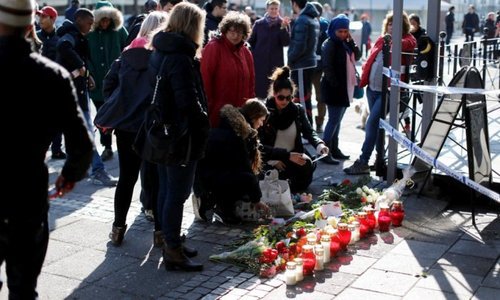 Swedes leaving floral tributes at the scene of the crime.

A recent gang shooting in Sweden was one of the most widely reported stories in the world, but the Main Stream Media in the U.S. and Europe excelled themselves in making sure readers didn’t learn too much. Violence continues to spread in the formerly peaceful capital of Political Correctness, so it takes ever more effort to ensure that the dispossession of the Swedish people through mass immigration will continue without opposition.

On Wednesday, masked gunmen in Gothenburg, Sweden’s second largest city, shot killed on two individuals and wounded about a dozen others. As of this writing, they are still at large. The Associated Press, Aljazeera, the BBC, Reuters and other outlets reported the story, which was also featured on Drudge [Sweden restaurant attack raises concern of gang violence , by Karl Ritter, Associated Press, March 19, 2015].

Yet many of the stories seemed to conceal as much information as they revealed. For example, this USA Today story gives absolutely no hint who the perps and victims might be: Police: At least 2 dead in Sweden pub shooting , by Will Cummings, March 19, 2015.

Of course, this is partly the fault of the Swedish authorities. While the name of Petar Petrovic, a victim of “Serbian-Swedish” descent, has been released, the other dead man’s name has not been released nor has any other information been uncovered besides the fact he had a criminal record.

Anna Rigstrom and Daniel Dickson of Reuters had one of the most informative stories because they at least mentioned the involvement of gangs:

“Lethal showdowns between gangs have become more common in Sweden after bikers such as the Hells Angels established a presence in the Nordic country in the 1990’s and the gangs have attracted young men in marginalized suburbs of the main cities.”

Local paper Goteborgsposten reported, “One of those killed on Wednesday was a prominent local gang member“

Yet even here gang activity is mentioned only so long as not too much detail is released. Though the “Hells Angels” are mentioned specifically as having a presence in the “Nordic country,” the “young men in marginalized suburbs” are not defined. As VDARE.com readers will realize immediately, that’s because these “marginalized suburbs” are populated by non-Swedish immigrants.

Even more significant, after the initial flurry of stories, there have been few follow ups. This brazen story of violence and killers still at large is receiving far less coverage than, say, a black University of Virginia student resisting arrest bumping his head. And the unavoidable explanation: the full implications of imported immigrant violence in the Vatican City of the Multicultural faith are too disturbing for the MSM to handle.

Such follow-ups that do exist double down on blaming the problem on white Swedes. The Guardian preached:

The tragedy has also shone a spotlight on a hidden aspect of Swedish society that reads like the sub-plot of a Stieg Larsson novel, in which poverty, racism and segregation are driving young men from immigrant backgrounds into gangs and gun crime…

Gang crime is not confined to Gothenburg – 22 Swedish cities are affected, said Magnus Lindgren of the Safer Sweden Foundation. This is a “new Sweden”, he said, which means new methods of crime fighting are needed.

“The main problem is the Swedish model of crime prevention which dates from the 1960s, trying to build a good society with good education and child care. That’s all very well, but we are fighting the crimes of yesterday, not necessarily the crimes of today or tomorrow.”

[Sweden shooting puts focus on life in ‘ghettos without hope,’ by David Crouch, The Guardian, March 20, 2015]

Unintentional confirmation can be found in the work of one Amir Rostami, [Twitter | Email him] a leading authority on Sweden’s organized crime groups based at Stockholm University. He blames the violence on the loss of control by formerly “very strong groups controlling the criminal world” and the rise of “smaller groups.” But after hemming and hawing about such structural factors, we get the admission of whose these gangs actually are.

It's hard to generalize, but they include motorcycle gangs, street gangs, crime syndicates and mafia-like organizations based on ethnicity. The street gangs, which were likely involved in the Gothenburg shooting, usually include people from socially exposed areas, often first or second generation immigrants.

But Rostami still manages to blame Swedish people for the problem! He goes on

The police, and not just the police, have generally been very bad at this. The society has a collective responsibility in that it has failed to take care of problems like unemployment and alienation. The police have handled separate incidents, but have on the whole not been successful in turning this around and have all in all not managed to handle the situation.”

Simultaneously, Rostami reassures Swedes that they aren’t in any real danger:

Question: Should the general public in Sweden be worried?

No. There is a risk that a third party is injured, but it is never something gangs set out to do intentionally. It usually only happens either by accident or because they simply don’t care if anybody else gets hurt. Gang violence is not the equivalent of terrorism in this respect. Injuring third parties is not good for the gangs’ public profile and makes them appear unprofessional. But firing arms, especially if you’re not trained, are hard to control, so it does happen.”

Nothing to worry about then!

While these stories specifically mention the Hells Angels, they almost never seem to give the names of any other specific gangs or their ethnic makeup. Courtesy of Wikipedia, here is a rough and ready list.

The hard reality: Sweden is no longer a peaceful country. According to The Local, Gothenburg was host to 52 shootings in the last year alone. Dozens have been shot in Biskopsgaarden, the neighborhood where this latest shooting took place. It is reported that in some areas of Biskopsgaarden 80% of the inhabitants are of immigrant origin. This level of cultural enrichment even forced the local government install video surveillance cameras in public places. Such Orwellian monitoring is not typical of Sweden now, but it may be soon.

Nor, notoriously, is Sweden any longer a rape-free country.

In the few articles that have even followed up on the story, white Swedes and “society” are blamed for immigrant crime. Yet if even far-Left Sweden can’t get it right, what hope is there for any other society in the world?

The real question a patriot media would be asking: why was this necessary? Why invite these problems through mass immigration in the first place?

But then, that’s the point. Immigration is designed to create problems and make societies worse. But don’t expect the MSM to have a debate on that anytime soon.