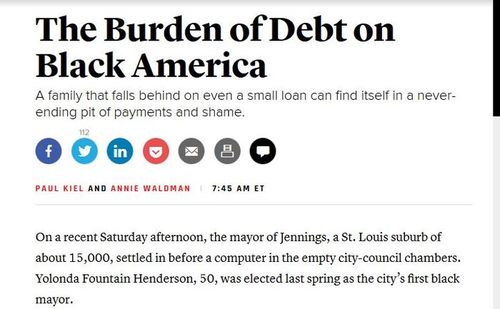 Disparate Deadbeats In THE ATLANTIC: It Couldn't Be That Blacks Don't Pay Their Bills

The Atlantic has found that creditors go to court to collect debts, and wouldn't you know, they target blacks.

Relying on some investigative reporting by the leftist Pro Publica, The Atlantic included this droll line:

The disparity was not merely because black families earn less than white families. Our analysis of five years of court judgments from three metropolitan areas — St. Louis, Chicago, and Newark — showed that even accounting for income, the rate of judgments was twice as high in mostly black neighborhoods as it was in mostly white ones.

These findings could suggest racial bias by lenders or collectors. But we found that there is another explanation: That generations of discrimination have left black families with grossly fewer resources to draw on when they come under financial pressure.

Or, maybe blacks don't spend their money wisely, and take on more debt than they can pay back. Maybe blacks are a bad credit risk.

But that can't be the case. Just like black misbehavior can't explain why black school students are disciplined more than their white counterparts.