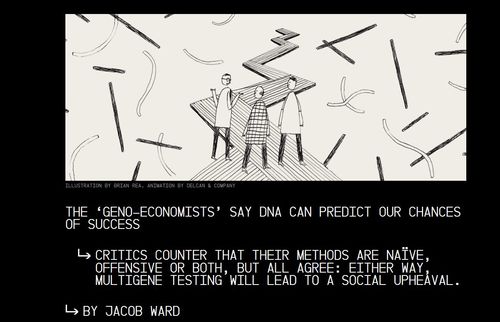 "Geno-Economics" And The Black-White Income Gap (In ALL CAPS)

THE ‘GENO-ECONOMISTS’ SAY DNA CAN PREDICT OUR CHANCES OF SUCCESS

CRITICS COUNTER THAT THEIR METHODS ARE NAÏVE, OFFENSIVE OR BOTH, BUT ALL AGREE: EITHER WAY, MULTIGENE TESTING WILL LEAD TO A SOCIAL UPHEAVAL.

Suggestion: when writing about IQ and race, DON’T USE ALL CAPS.

I was corresponding once with a Nobel Laureate who emailed in all caps. I finally got up the courage to suggest that he just type in all lower case, because, you know, the all caps kind of make it look like you are shouting. He responded: “BUT I AM SHOUTING.”

… But [economist Daniel] Benjamin has remained committed to genes, and in 2007, as genome data became cheaper and more plentiful, a new method for connecting genes to outcomes emerged: genome-wide association studies (G.W.A.S.). With the candidate-gene method, you had to essentially guess which genes might be involved, and usually got it wrong. “With G.W.A.S., you look at the whole genome and let the data tell you where there’s variation,” Benjamin says.

Once a G.W.A.S. shows genetic effects across a group, a “polygenic score” can be assigned to individuals, summarizing the genetic patterns that correlate to outcomes found in the group. Although no one genetic marker might predict anything, this combined score based on the entire genome can be a predictor of all sorts of things. And here’s why it’s so useful: People outside that sample can then have their DNA screened, and are assigned their own polygenic score, and the predictions tend to carry over. This, Benjamin realized, was the sort of statistical tool an economist could use. …

As an economist, however, Benjamin wasn’t interested in medical outcomes. He wanted to see if our genes predict social outcomes.

In 2011, with a grant from the National Science Foundation, Benjamin launched the Social Science Genetic Association Consortium, an unprecedented effort to gather unconnected genetic databases into one enormous sample that could be studied by researchers from outside the world of genetic science. In July 2018, Benjamin and four senior co-authors, drawing on that database, published a landmark study in Nature Genetics. More than 80 authors from more than 50 institutions, including the private company 23andMe, gathered and studied the DNA of over 1.1 million people. It was the largest genetics study ever published, and the subject was not height or heart disease, but how far we go in school.

The researchers assigned each participant a polygenic score based on how broad genetic variations correlated with what’s called “educational attainment.” (They chose it because intake forms in medical offices tend to ask patients what education they’ve completed.) The predictive power of the polygenic score was very small — it predicts more accurately than the parents’ income level, but not as accurately as the parents’ own level of educational attainment — and it’s useless for making individual predictions. Like other G.W.A.S., this one reveals patterns but doesn’t explain them.

And with a data set this big, the patterns provide a lot of information. The authors calculated, for instance, that those in the top fifth of polygenic scores had a 57 percent chance of earning a four-year degree, while those in the bottom fifth had a 12 percent chance. And with that degree of correlation, the authors wrote, polygenic scores can improve the accuracy of other studies of education.

For 19 years, Benjamin and his colleagues were looking for fundamentals. Now, they say, they’ve found them. The genes with which you are born travel during your life through a mediating layer of biology and social experience — racism, puberty, vacations, illness, industrial accidents, sexual harassment, poverty, divorce — that seems so complicated as to be unmeasurable. But their study, part of a field now called “geno-economics,” claims to measure, in part, the degree to which our genes determine who we become. How is that possible? And in an era of dramatic political divisions, predatory companies and systemic inequality, should we really be mapping genetics to social outcomes?

THE LIST OF authors on Benjamin’s study is like an academic bus crash: sociologists and economists jumbled with epidemiologists, psychiatrists and geneticists. But Dalton Conley, a professor of sociology at Princeton, is perhaps the most personally and professionally complicated jumble of them all.

“I grew up as a white kid in a largely African-American and Latino neighborhood full of housing projects,” Conley says. “My parents were lefty artists. At a certain point they lied about our address to move me to a public school in Greenwich Village, so I had a daily commute across the socioeconomic landscape.” …

Conley describes his early academic work as “lefty sociology.” His Ph.D. thesis was on the black-white wealth gap and he dedicated his early career to studying the transmission of health and wealth between parents and children.

At N.Y.U., Conley kept getting into disagreements with geneticists, arguing that their methods were dangerously naïve. It seemed to him implausible that studying only twins — the gold standard of genetics research — was enough to teach us the difference between nature and nurture. But over time, he decided that it wasn’t enough to just argue. Conley is an academic, and even within that tortured group he is something of a masochist. At that time he was a tenured professor, the kind of gig most people see as the endgame of an academic career, and yet he decided to go back and grind out another Ph.D., this time in genetics.

He went into his program believing that our social environment is largely the cause of our outcomes, and that biology is usually the dependent variable. By the end of his time, he says, the causal arrow in his mind had pretty much flipped the other way: “I tried to show for a range of outcomes that the genetic models were overstating the impact of genetics because of their crazy assumptions.” He sighs. “But I ended up showing that they’re right.”

Now he says he’s convinced the benefits of studying polygenic scores are worth the risks. “I still have some queasiness about what can be done with this research, how politically explosive it can be,” he says. “But as someone who wants to drill down into human behavior, I don’t think we can ignore it anymore.”

Benjamin and his co-authors included a long F.A.Q. document that carefully explained the limits of their findings, not least that they shouldn’t be used to create some sort of half-baked genetics-based educational policy. …

If what Benjamin’s study claims to measure is controversial, consider what it doesn’t measure. The study only draws on the DNA of white people — Europeans, Icelanders, Caucasians in North America, Australia and the United Kingdom. And that’s in part because only those groups, along with Chinese nationals, have given over their D.N.A. in large enough numbers to achieve the statistical power that geno-economics researchers need. I shared Benjamin’s paper with Jesus Hernandez, an urban sociologist who spent 30 years working for the state of California and at the University of California, Davis, and now runs his own research firm mapping the distribution of things like transportation, housing and education to predict social outcomes. Later, when I reached him by phone, he laughed bitterly. “We always do white people first,” he says, “because it’s easiest.” …

But even if the same numbers of people from all races provided their data, one group would still have to be excluded from the study: people with recent genetic roots in Africa, which is to say both Africans, African-Americans and many Latinos. This racial exclusion has to do with the origins of modern humans. When a group of people on what is now the continent of Africa decided, some 50,000 to 70,000 years ago, to go see what the rest of the world was about, they formed what geneticists call a “population bottleneck.” The small group that walked off the continent formed the small gene pool from which all non-African people — whether a Caucasian or a Han Chinese — descend. So the genes of people within the much larger, much more ancient gene pool of Africa (including those brought to the United States and elsewhere by slavery) are so much more diverse that researchers would need a far larger sample — at least two or three times as large, Benjamin says — to even have a hope of finding measurable patterns. Benjamin and his collaborators in fact tried applying the polygenic score derived from European DNA to African-Americans and found the method didn’t work well enough to be useful. 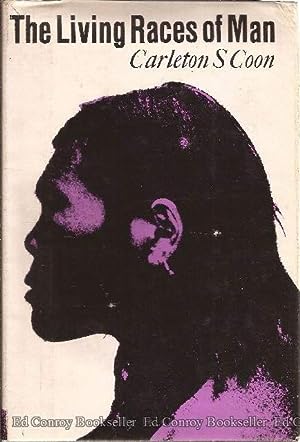 If you go back to a book of classical physical anthropology like Carleton Coon’s 1965 bestseller The Living Races of Man, Coon figured Europeans and sub-Saharans were closer to each other than they were to East Asians, New World Indians, and Australians. In Coon’s thinking, the giant mountains of central Asia were the main divide, not the Sahara and Congo rainforest. But early DNA evidence in the 1980s eventually pointed toward a sub-Saharan vs. everybody else model.

And that’s kind of how people act today: when they say “Celebrate Diversity” they deep down most intensely mean “Celebrate Sub-Saharans.” Today’s prejudice in which blacks get many more diversity Pokemon Point points than, say, East Asians, Mexican mestizos, American Indians, Samoans, Australian aborigines, or Andaman Islanders turns out to be rather reasonable, genetically speaking.

You might argue that African-Americans aren’t really all that diverse, other than their level of white admixture. In response, you will be told the cliche that Africans have the most genetic diversity, but that’s primarily due to to genes that don’t affect much but are useful for tracking ancestry.

In the real world, African Americans tend to have fairly similar strengths and weaknesses. But that doesn’t matter because blacks, as a group, are considered to be the most Diverse.

The word “diversity” is notoriously slippery in meaning, but the way modern Americans seem to use it as referring to a sort of Vitamin D that is good for you. Blacks have the most Vitamin D, and so the more blacks you have the more Diverse you are, which is for your own good.