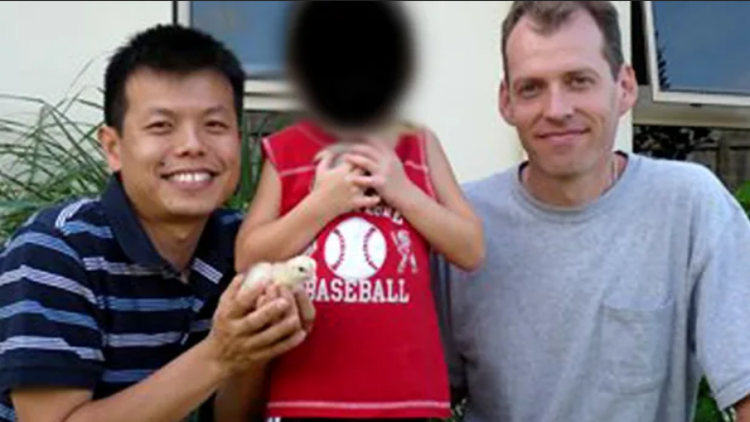 The AP story had very few details and said

The men had been living with the boy in California, where they were able to use falsified records to legalize an adoption, according to court records obtained by The Associated Press. The men's names are not being released by the AP to protect the identity of the boy, who prosecutors say had been rescued and was being cared for in California.

It's fine to protect the identity of the victims, but when names are kept secret, the reader can't determine the racial aspect of sex crimes.

Mark J. Newton was sentenced to 40 years in prison and was ordered to pay $400,000 in restitution to the child. His boyfriend, Peter Truong, pleaded guilty and is awaiting sentencing.

On Friday, Mark J. Newton, 42, was sentenced to 40 years in prison and was ordered to pay $400,000 in restitution to the child. His boyfriend, Peter Truong, 36, pleaded guilty and is awaiting sentencing.

Investigators say Newton and Truong flew the boy between Australia, the United States, France and Germany to record at least eight other pedophiles sexually abuse him.

They shared images and videos on their perverted network, which specialized in depictions of boys between 6 and 8 years old, federal prosecutors said.

"Personally … I think this is probably the worst (pedophile) rings ... if not the worst ring I've ever heard of," investigator Brian Bone of the U.S. Postal Inspection Service told Australia’s Seven News.

Newton addressed the U.S. federal courtroom in Indiana in shackles Friday. His voice quavered as he said, "being a father was an honor and a privilege that amounted to the best six years of my life."

The word "gay" does not appear in the article. (It does in the comments!) That's in spite of the fact that the pair claimed "profiling":

Initially, Newton and Truong claimed they were being targeted because of their sexual orientation. The head of the Queensland task force, Detective Inspector Jon Rouse, roundly dismissed this accusation.

"If you're harming a child — I don't care what your gender is — we will take action. Our interest is the child, not your sexual preference," said Rouse.

If Detective Inspector Rouse is aware that some "genders" are more likely to do this kind of thing than others, he can't say so. It would cost him his job.