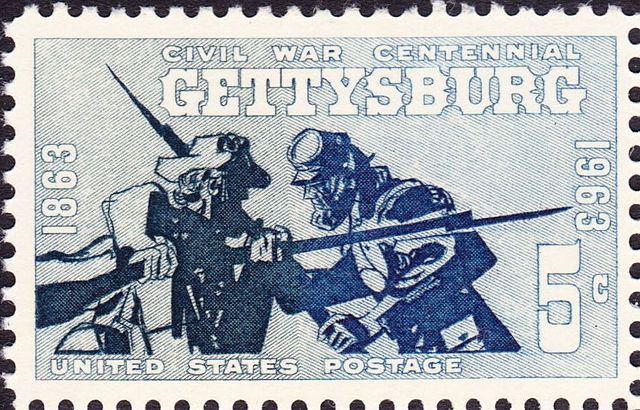 The Gettysburg Sesquicentennial and America's Future

The Battle of Gettysburg in the Civil War was fought on July 1st, 2nd and 3rd, 1863.  That means the battle's sesquiscentennial is next week.    Various commemorations are planned at or near the actual historical battlefield.  CNN reports that

This weekend (June 29 and 30) and through July 7, between 200,000 and 300,000 visitors — more than the number of combatants — will flock to the town and fields of Gettysburg National Military Park to mark the 150th anniversary of the three-day clash, which cost an incredible 51,000 casualties.

You can peruse the entire article (and see photographs) here: 150th Anniversary of Battle of Gettysburg Provides a Bigger Story  [By Phil Gast, CNN, June 28, 2013].

The Civil War is an important part of our shared memory as Americans.  There's something about that epic struggle and those who fought it (on both sides) that puts it in a class all its own.

My family lived in the Union during the War.  James Dunlavy of Iowa, a kinsman of mine, won a Congressional Medal of Honor for capturing  Confederate general John Sappington Marmaduke  at the Battle of Mine Creek , Kansas, in 1864.  (Uncle Jimmy, as he was called in the family, is mentioned in the Wikipedia article on the battle here.)

Civil War re-enactors, many of whom are participating in the Gettysburg commemorations, are very serious at what they do and perform a great service in preserving the memory of the Civil War and demonstrating its details.  If you have a chance to observe re-enactors it's certainly worth your time.

I know that Americans may disagree over the Civil War and its significance, but we should honor the men who fought on both sides.

I wonder though, about the future of our country. If the drastic demographic transformation of our country continues apace, will future generations appreciate the Civil War?   If by 2100 the U.S. is simply a Spanish-speaking appendage of Latin America, will there be much interest in the battles of the Civil War and their relevance to the historical American nation?