Frum Features Birthright Citizenship Reform - Could He Smell A Deal? 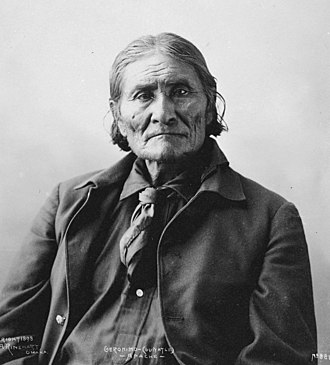 Geronimo - Born in America but never a citizen

David Frum continues to astonish. Having mentioned the Inside-the-Beltway unmentionable immigration moratorium solution to the unemployment problem last summer, and comprehensively eviscerated the Gingrich Amnesty/Immigration Acceleration proposal in November, he has now hosted at Frum Forum an incisive discussion of the Birthright citizenship issue by our old friend Howard Foster. It’s Time to Debate Birthright Citizenship January 5th 2012 is a succinct and intelligent discussion of what I like to call the jugular of the Treason Lobby’s effort to dissolve the historic American nation and elect a new people. Fixing it alone would delay the reconquista perhaps two generations.

Indians (fatuous to call them Native Americans in this context) were in fact denied the vote until specifically granted the franchise by the Snyder Act in 1924.

Foster then efficiently discusses the degrading of the interpretation of the Citizenship Clause. Essentially the Supreme Court a generation later changed course and decided to ignore the jurisdiction issue. Geographic location became the only test.

There is no reason why this specimen of judicial legislation should be regarded with any particular reverence. Foster’s conclusion:

The Frum Forum comment thread is steaming with hysterical rage. The Left has developed a tremendous sense of entitlement about the demographic transformation of America. Any threat to it produces fury.

But with the Cheap Labor Lobby likely or certain to own the next GOP nominee, the time has come for this non-economic incentive to be offered again to get Patriots to hold their noses and vote.  Maybe the very business-like Frum scents this is on the table. It is one part of the Ron Paul 2012 platform which could be adopted. Only those seeking political – as opposed to financial -  benefits from immigration really need this crazy situation to continue.