In March 2012, the National Geographic magazine published a glowing story titled “Marseille Melting Pot” about the French port city which asked, “As more European countries become nations of immigrants, is the multicultural city of Marseille a vision of the future?” with pretty pictures of diversity like the one below. 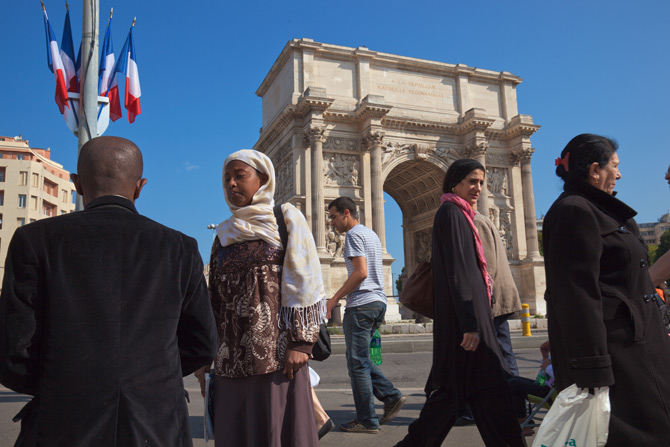 Since then the crime has gotten worse, and the mayor requested a year ago that the army be brought in to tackle the Kalshnikov-toting gangs.

To be fair, Marseille has been a crime town for years, as a connecting point for Afghan heroin going to the US in the French Connection. However, the influx of hostile Muslims has added another flash point.

Now there is an admission of further failure to maintain public order, with Hollande’s Socialist government considering the designation of Marseille as a no-go zone that needs extra policing.

VladTepesBlog.com has posted a translation of a July 31 Le Figaro article with a photo showing the new gangsterized city: 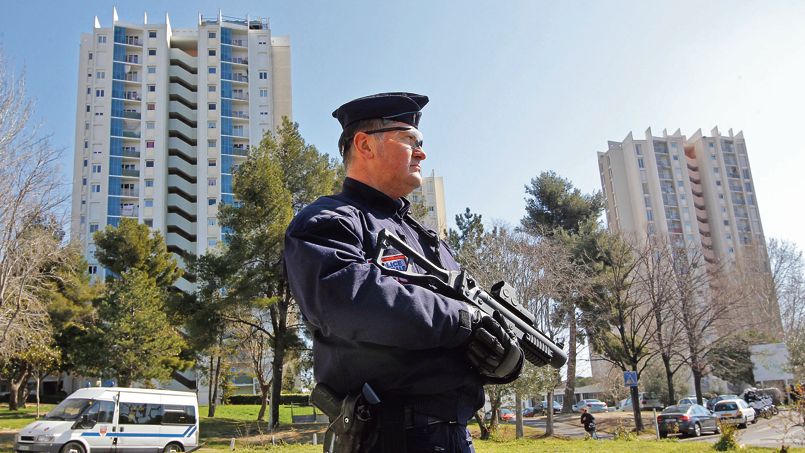 France’s Interior Minister Manuel Valls refuses to place the whole city of Marseille in a Priority Security Zone, July 31, 2013, An original translation by C. B. Sashenka from Le Figaro

VladTepesBlog: Just to be clear. France is considering declaring the second largest city, and one of the poorest, in the entire country a No-Go zone due primarily to muslim violence. The English vocabulary for extremes has already been overused to such an extent that there simply are no words left to describe the magnitude of the significance of this article. As to our respective nations? Someone needs to make a bar graph of available data. That is, unless we actually do something different.

For the Interior Minister Valls, to comply with the request of the socialist president of the urban community of Marseilles, Eugene Caselli, to place the entire Phoenician City (Marseille) in a Priority Security Zone (ZSP in French – Zone de Sécurité Prioritaire), would not make any sense.

A proposition that “would not be effective and would not make any sense” for Manuel Valls.

Wednesday, the Minister of Interior rejected the proposal advanced by Eugene Caselli, the socialist president of the urban community, and others before him, to classify the entire Phoenician City as a Priority Security Zone (ZSP in French).

In a letter addressed to Manuel Valls, the socialist elected official complains about the situation and denounces “intolerable exactions”. “I’m worried and angered. The situation has become so widespread that it warrants a maximum response”, writes the elected official Eugene Caselli, also candidate for the socialist primary elections for the local elections of Marseilles in 2014.

On France-Info, Manuel Valls rejected this radical measure: “We will not put all of Marseilles in a priority zone of safety. The ZSP’s are targeted devices”. In Marseilles, “there is only the city centre which is not in a zone of priority safety. The south and north districts are already in priority zones of safety; and in the city centre, we have created dedicated units (…) that actively patrol ”, he recalled.

Eugene Caselli had advanced this proposal after a wave of new violence at night on Monday to Tuesday. A little before midnight, a body had been found partly burned in a town bordering Marseilles, in Pennes-Mirabeau. The 22-year old young man was killed by a bullet to the head. Two men in their thirties were wounded by bullets in an industrial zone of the Saint-Pierre district. Finally, a driver of a garbage truck was a victim of several paintball shootings, when he drove au niveau de la traverse de la Jarre, not far from an area in a ZSP.

But the classification of the whole of Marseilles as a priority security zone is an old claim. In August 2012, UMP senator and mayor of Marseilles, Jean-Claude Gaudin, had also made this request in Le Figaro .

A few days earlier, the socialist senator Samia Ghali had required the intervention of the military. The creation of a second priority security zone had then been decided. A first zone already covered the North District in the 3rd, 13th, 14th, 15th and 16th zones. Since November, the 9th, 10th and 11th zones in the South of the city are equally concerning. The authorities are taking concerted action appropriate with the acts of delinquency met on the ground.

The Alliance Police Union on the classification of the entire Marseilles as a priority security zone: “It is necessary to take into account the specificities of the Marseilles territory. Forty “districts” (cités) are classified as being at risk by the Prefecture (administrative jurisdiction), they are inside the city and not only in the areas defined by the government”, justifies David-Olivier Reverdy, spokesman of the Alliance for the Mediterranean zone. He denounces “a splash effect” by explaining why “the delinquency does not know borders, it shifts according to the actions of police force”.