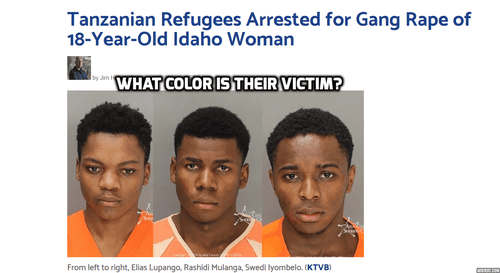 Kuna, Idaho, has a population of under 17, 000, and apparently it's been targeted for  Tanzanian refugee resettlement, with predictable results. (Really predictable--see the stats on sexual violence in Tanzania here.)

Gateway Pundit has the story:

Three men and a teenage boy were arrested for a gang rape in Kuna, Idaho.

The men face life in prison if convicted.

Three men and a teenage boy are in custody after police say they sexually assaulted an 18-year-old woman earlier this month.

Elias Lupango, 19, Rashidi Mulanga, 18 and Swedi Iyombelo, 18, all of Boise, were arrested on felony rape charges and booked into the Ada County Jail Thursday. The juvenile suspect, a 16-year-old boy whose name has not been released, was arrested Friday morning, and is held in Ada County’s Juvenile Detention facility.

Kuna Police began investigating the case Feb. 8. The victim told investigators that she had been with Iyolmbelo, who she had met recently, in a car in a Kuna neighborhood when he began to sexually assault her.

A short time later, she said, the other three suspects showed up, and also sexually assaulted her in the car.

Detectives investigated the case and conducted interviews, ultimately developing enough evidence to get arrest warrants for Lupango, Mulanga, Iyombelo, and the 16-year-old. [More, including video at the link.]

Kuna was previously a white town, 0.6% African American in 2010. The name Kuna sounds kind of like an African town's name, but it actually derives from a Shoshone Indian word. Local media is covering this on the usual "Man Arrested" basis:

The interesting and newsworthy thing about these guys is not their age ("teens") or place of residence ("Boise Men") but that they're Tanzanian. How did they get there, and what color is their victim? Is she a Tanzanian herself, a white native of Idaho, or a Hispanic?

The victim's name is suppressed by authorities and media  out of a sense of decency and concern for the feelings of the victim and her family, but if the name is kept from the public, the media has a responsibility to tell the public whether these men are accused of raping a white woman or a black woman. The media acts as if their responsibility is to suppress this knowledge, to avoid inflaming public opinion.

Of course, that only applies to white public opinion—during the Duke Rape Hoax, a black female Washington Post reporter wrote a story which began with the line "She was black, they were mostly white, and race and sex were in the air."