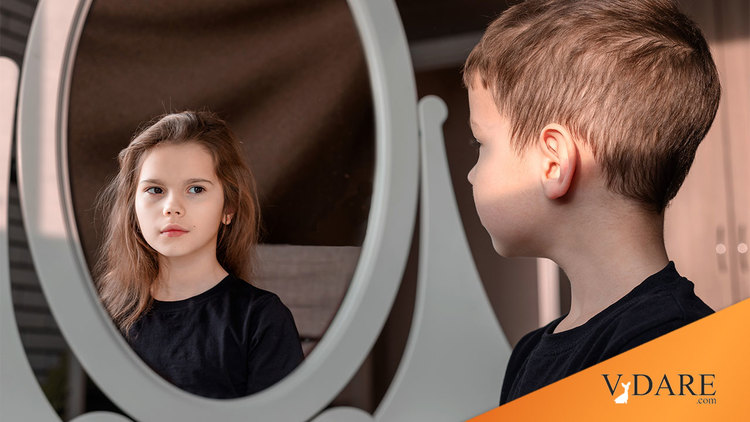 Earlier by Michelle Malkin: The Nuking Of The American Nuclear Family

A lot of Americans  can't wait to conscript children into our weird, sick cultural fads. That's how it's seemed to me, reading about the reaction to this new state law in Florida.

This is the law that prohibits sex ed in all public schools from kindergarten through the third grade.

"Kindergarten through the third grade" means ages three to seven or eight. It seems astonishing to me that anyone would want such little children to be taught about sex, let alone that there are so many people wanting it that a law has to be passed to restrain them.

Do these people not have any kids of their own? Even if they don't—and you have to suspect they mostly don't, while feeling sorry for the kids of those who do—do they not have any memories of their own childhood, of what it was like to be six or seven years old?

And of course this isn't sex ed as we understood it fifty years ago—the birds and the bees. This is the postmodern ideological cult that there is no such thing as sex, that sex is merely a "social construct," a sort of optical illusion. You can be any sex you want to be!

Matters of morality aside, how do you teach ideology to seven-year-olds? What else is on the elementary-school curriculum? The Labor Theory of Value? Dialectical Materialism? The Interpenetration of Opposites?

I actually wouldn't mind that so much. Sure, Marxism-Leninism is philosophically dubious, and has been used to justify the murder of tens of millions of harmless people. It has some intellectual substance, though. You have to work your mind if you want to engage with it. To that degree it's the kind of thing that could be taught in a schoolroom, to young people of sufficient intelligence and maturity—smart high-school seniors, perhaps.

Matters of sex, though, from the first childhood awareness of differences between boys and girls up to the birds and bees stuff, should not be part of any school curriculum. Those things are for parents to impart. Or not impart: I'd prefer that parental rights were total in this sphere. The kids will learn anyway from their peers; that's where I got ninety percent of my sex ed.

In a spirit of tout comprendre c'est tout pardonner, I went digging around in the news reports to try to get some sense of what was driving the bill's opponents.

Well, U.S. Education Secretary Miguel Cardona has actually called the bill hateful, so presumably he knows. Here he was on Tuesday: "Leaders in Florida are prioritizing hateful bills that hurt some of the students most in need."

In need of what? Secretary Cardona has already told us. A couple of sentences previously he referred to, quote: "the academic and mental health supports they need."

Well, for sure schools should give the kids academic support. That's kind of what schools are for. However, if a kid has mental health issues, he should be in the care of a properly credentialed psychiatrist. That's not the domain of classroom teachers, any more than is setting broken bones.

To return to my main question, though: Who is it that we hateful people hate?

Quote: "The Florida state legislature is playing a dangerous political game with the health and safety of LGBTQ+ kids." That's from a person named Cathryn M. Oakley, some kind of functionary at the Human Rights Campaign, which is a homosexualist lobby.

I personally think the idea of teaching third-graders about sexual oddity is unspeakably disgusting; yet I have myself written sympathetically about an adult transsexual. I refer curious listeners to my January 2021 Diary.

What you can't do—at any rate, what I can't do—is dislike having sexual eccentricity promoted and propagandized to little children without hating the promoters and propagandists. In my opinion, there isn't a Hell hot enough for these people.