Last December on VDARE.com I advertised the charms of Finland's then-new Prime Minister Sanna Marin, age 34. I don't mean political charms, either: the lady is exceptionally easy on the eye.

Ms Marin makes no attempt to hide those charms. Just recently she did a photo shoot for a fashion magazine. In one picture she was wearing a very low-cut jacket, cut low enough to tell us that (a) she was not wearing a bra, and (b) has small but well-formed breasts. 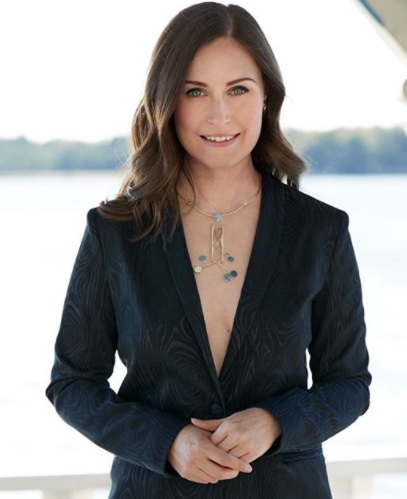 Commentarial opinion has been sharply divided. On one side of the cleavage, there's a Grundy faction saying that as Prime Minister, Ms Marin should attend to the dignity of her office and not distract us with her secondary sexual characteristics. The more easy-going faction to which I belong counters that politicians take themselves far too seriously, so that any trace of normal human impulses, like a young woman showing off her bristols, is welcome relief.

For commentary on this episode with some intellectual depth, check out Ed Dutton, the Jolly Heretic, who is a very occasional VDARE.com contributor. Ed actually lives in Finland, and he introduced us to Ms Marin last year via his YouTube channel when she became Prime Minister. Ed bases all his commentary on evolutionary psychology.

Just today Ed has posted a vidcast at BitChute, the first fifteen minutes or so given over to an analysis of Ms Marin's career and boobs, which latter Ed describes delicately as, quote, "fried-egg standard" (11m37s). You have to not mind Ed's occasional lapses into Finnish and his rapid-fire delivery, much more challenging to the attention than my more leisurely style.