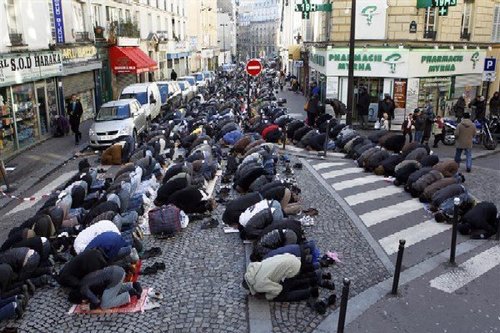 France: Marine Le Pen to Be Tried for Anti-Muslim Remarks

Specifically, in 2010 she said that Muslims praying en masse in the streets were an unwelcome occupation of public space not unlike the bitter years of WWII when Hitler’s army ruled Paris and other regions of France.

Earlier this month, CBN reposted a 2010 video about the street prayers to remind us how obnoxious they are:

Interestingly, France made street prayers illegal in 2011, but Muslims ignored the law.

The French people were irate about the mass jihad slaughter of the Charlie Hebdo staff earlier this year, but they seem to be snoozing through this more subtle assault on free speech. Nevertheless, both attacks have totalitarian Islam as the cause.

Le Pen, whom polls see likely to win a regional election in northern France in December, has widened the National Front’s appeal since she took its helm in 2011 by expelling extremists and cracking down on anti-Semitism.

But the party also thrives on concerns over immigration and radical Islam. In a meeting in 2010, Le Pen criticised Muslims praying in the streets when mosques are full.

She will be judged on Oct. 20 over charges of “incitement to discrimination over people’s religious beliefs,” the prosecutor’s office in Lyon said.

Le Pen had told the 2010 rally in Lyon: “I’m sorry, but for those who really like to talk about World War Two, if we’re talking about occupation, we could talk about that (street prayers), because that is clearly an occupation of the territory.”

She reacted indignantly on Tuesday to news of the trial.” It is a scandal that a political leader can be sued for expressing her beliefs,” she told Reuters. “Those who denounce the illegal behaviour of fundamentalists are more likely to be sued than the fundamentalists who behave illegally.”

It was not immediately clear whether the trial, which will take place less than two months before the December regional election, could harm Le Pen’s chances of winning over the Nord-Pas-de-Calais region.

Her opinion poll ratings have not suffered from a row with her father Jean-Marie, the FN founder, whom she expelled from the party in August for comments playing down the Holocaust.