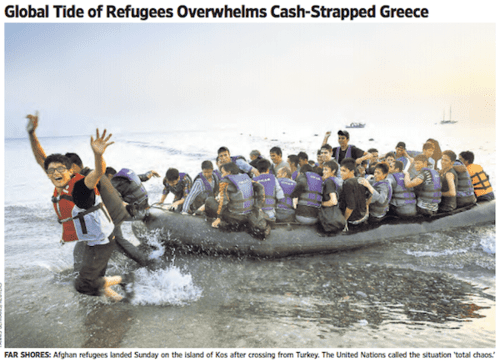 “Refugees” Flooding Europe Have High Standards for Their Treatment

There are real refugees fleeing war in the Middle East who are invading Europe these days, but quite a number are economic moochers who have seen the first world lifestyle on TV and would rather live there than in their peaceful African villages.

These people expect wealthy Europe to roll out the red carpet and start dispensing the free stuff immediately. When services aren’t forthcoming for the thousands overwhelming the poor countries on the edge of Europe, the scroungers can get huffy, as one sees in the DW video below.

DEMANDING SYRIAN WOMAN: I don’t have money! Help me! I want to go! I don’t want to stay in Greece! I want to go in Europa! I am Syrian!

YOUNG SYRIAN MAN: I see we are in third world countries. No toilets, no water. People have been waiting for more than 10 years, 10 days. What can I say? Is this Europe? If this is Europe, we’re going back to Syria.

And speaking of non-refugee economic relocators, check out the front page photo below from the Wall Street Journal of August 10. All of the “refugees” are young men who look like they have never missed a meal. Family groups are more likely to be genuine refugees, although certainly not all, but these gangs of young men are out to grab some first world stuff.

Greece has its own problems paying its bills these days following a full blown economic crisis that rocked the Eurozone for weeks. Greece doesn’t need the aggravation of thousands of uninvited foreigners arriving and demanding a handout. The article below reports that 124,000 illegal aliens have arrived in Greece this year and the country is overwhelmed.

The migrant crisis on the Greek island of Kos is pushing people to their limits.

Fights broke out during a registration procedure as more than 1,000 migrants gathered in a long, crowded queue outside a local football stadium.

Police reportedly used fire extinguishers and batons to control the crowd. It comes amid heightened scrutiny of security forces after a policeman was suspended on Monday for ‘abusing a migrant’.

Greece is struggling to cope with the increase of migrant arrivals. Some 124,000 people arrived so far this year mostly on the eastern islands closest to Turkey. Authorities are unable to keep pace. On Friday the UN refugee agency warned the country to take control of what it called the ‘total chaos’ on the Mediterranean islands.

Many of those arriving in rubber dinghies are fleeing conflicts in the Middle East and Africa. Risking their lives and handing over their savings to people smugglers they are then left stranded on Europe’s mediterranean coastline.

In Kos, one migrant said that it cost him 100 euros per day to stay in a hotel.

A Syrian woman appealed, “I don’t have money, please, help me. I want to go, I don’t want to stay in Greece, I want to go to Europe. I am Syrian. Syrians (have) bigger problems!”

The Mayor of Kos called for immediate assistance, warning that blood will be shed and the situation will get out of hand.

On Monday the EU promised 2.4 billion euros in aid to deal with the migrant crisis. Greece is to receive 473 million.