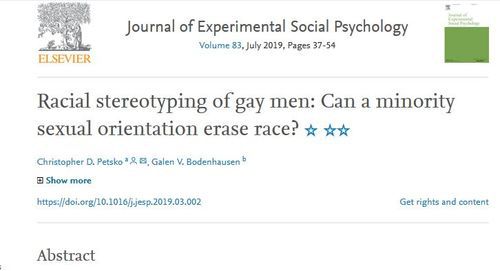 Falsifying the Theory of Intersectionality

From the Journal of Experimental Social Psychology:

Abstract
Decades of research indicate that the traits we ascribe to people often depend on their race. Yet, the bulk of this research has not considered how racial stereotypes might also depend on other aspects of targets’ identities. To address this, researchers have begun to ask intersectional questions about racial stereotypes, such as whether they are applied in similar ways to men and women, or to children and adults. In the present studies, we examine whether men who are described as gay (vs. not) become de-racialized in the minds of perceivers. That is, we test whether gay (vs. non-gay) men are perceived as less stereotypic of their own racial or ethnic groups. Results consistently support the de-racialization hypothesis, regardless of whether targets are Black, White, Asian, or Hispanic. Moreover, when Black and Hispanic men are described as gay (vs. not), they become stereotypically “Whitened” in addition to seeming less stereotypic of their own racial groups. This “Whitening” effect is explained by Black and Hispanic men’s seeming more affluent when described as gay (vs. when not), an effect that holds even when controlling for changes in these men’s stereotypic femininity. Collectively, these findings underscore the point that race and sexual orientation are not orthogonal in the minds of perceivers. A minority sexual orientation can alter the racial characteristics ascribed to men, reducing the perceived presence of race-typical traits and, for low-SES men, increasing their perceived “Whiteness.”

This plays out in the real world as well. For example, a large fraction of the black and Mexican men I met in the corporate yuppie world were gay. My explanation: among the problems besetting black and Mexican men in advancing in office jobs is an excess of machismo. For blacks, it’s more at the Nature level, for Mexicans more at Nurture level: jobs involving lifting heavy things are macho, while jobs involving typing are not. Gays generally don’t suffer from an excess of machismo, so they do well in white collar work.

Interestingly, findings like these debunk the wildly popular Theory of Intersectionality, which, by logic, predicts that Your Oppression Index depends upon how many Diversity Pokemon Points you have.

In reality, it’s more the opposite (for example, see Raj Chetty’s 2018 work on incomes of black men vs. black women), thus falsifying the Theory of Intersectionality.

In contrast, HBD and cultural realism theories suggest that because gay men tend to be less masculine, then black and Mexican gay men on average fit in better in genteel work environments than do straight black and Mexican men. This fits the data a lot better than the Theory of Intersectionality, but that’s why nobody ever articulates it: it’s crimethink.