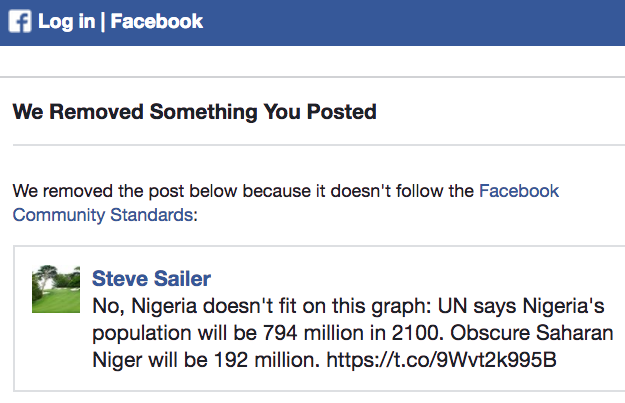 I don’t do much with Facebook, but I guess I have it set up to automatically post my Tweets. Yesterday, after I tweeted a graph comparing the UN’s population forecasts for four African and four European countries, somebody asked me if the country that is expected to reach 192 million by the end of century is famously overpopulated Nigeria. I replied that Nigeria didn’t fit on my graph, so I showed instead little-known Niger. In the above graph, I’m comparing Niger to Iran. You can see a steep increase in Iranian population after the mullahs took over in the late 1970s and pushed the pedal to the metal on fertility. But you can then see the Iranian theocrats’ change of heart in the early 1990s when they realized that Iran was overpopulated enough already and so they started encouraging more sustainable family sizes in their country.

In other words, Iran shows that it is possible for prudent leadership to moderate population growth to a responsible level

But you can also see that it will likely take about 60 years from this point of wising up on fertility for Iran’s population to stop growing due to the phenomenon of demographic momentum.

In contrast, once empty Niger in the impoverished southern Sahara is starting to fill up with what bodes to be an enormous number of people, some of whom are headed for Europe already, with virtually nobody trying to pump the brakes. Practically nobody in the West is even asking Niger to show some responsibility.