In his YouTube podcast with Diana West, VDARE.com Editor Peter Brimelow reminisced about that fact that Enoch Powell, discussing the obfuscation of immigration figures by the civil servants of the British Home Office (which was responsible for immigration) wondered if they were as badly infiltrated (by the Soviet Union) as the Foreign Office. (It was well known that the Foreign Office, like the US State Department, had been badly infiltrated.)

Peter was speaking from memory, because he was actually in England in 1970 when it happened, but he was correct.

From Simon Heffer's biography of Powell, Like The Roman:

Later that day in his own constituency he rounded on civil servants who had concealed the truth about immigration. “If I have been guilty on this score it is understatement that has been my offence. On this subject, so vital to their future, the people of this country have been misled”— there was a pause while his audience cheered—“cruelly and persistently, till one begins to wonder if the Foreign Office was the only Department of State into which enemies of this country had been infiltrated.” [Times of London, June 15, 1970]

It was right he should return directly to the theme of immigration in Wolverhampton, since it was his experience there that had prompted him to make the Birmingham speech. He told his audience that the scale of immigration was already higher than it had been in the previous thousand years of the nation’s history. 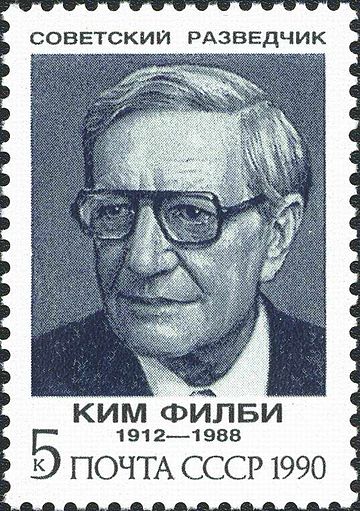 Of course, it's quite possible that the Home Office bureaucrats were Communist operatives or sympathizers, but it's equally possible that they were simply Leftists or people who thought that the truth about immigration figures would upset people, and cause them to vote for "racist" candidates.

So you have to ask: Were they traitors, like Kim Philby (pictured right on Soviet postage stamp) or Alger Hiss, working for a specific foreign country, or were they just alienated from their own country and its past, and wanted to change it?

The answer is it doesn't make any difference to English victims of terrorism, London "gun crime," or the white female victims of sex trafficking in Rotherham.

The effect on England is the same.