Via Instapundit, another Rotherham-style Muslim sex ring in Britain, in Northumbria and Yorkshire:

THOSE AWFUL FAR-RIGHT GROUPS: Police in swoop on 45 more men over child sex grooming: ‘Milestone’ operation sees dozens of Asian suspects charged with rape, sexual assault and trafficking. “Almost all of the men in both cases are from Asian backgrounds, prompting police leading one of the cases to warn that far-Right groups may use the issue to stir up racial tension.” By “Asian,” of course, they mean Muslim, probably mostly from Pakistan.

You know, I think maybe what's stirring up "racial tension" is awful Muslim sex crimes. The story from the Daily Mail is about two separate cases. I've boldfaced the parts that may stir up a little "racial tension", assuming it turns out that, as in Rotherham, all the victims are white. 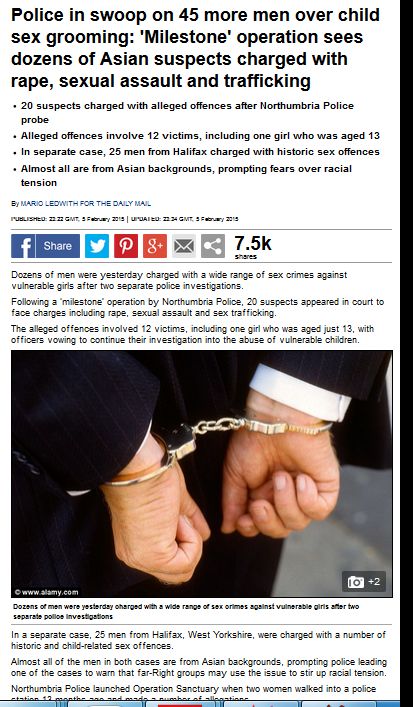 Dozens of men were yesterday charged with a wide range of sex crimes against vulnerable girls after two separate police investigations.

The alleged offences involved 12 victims, including one girl who was aged just 13, with officers vowing to continue their investigation into the abuse of vulnerable children.

In a separate case, 25 men from Halifax, West Yorkshire, were charged with a number of historic and child-related sex offences.

Almost all of the men in both cases are from Asian backgrounds, prompting police leading one of the cases to warn that far-Right groups may use the issue to stir up racial tension.

Northumbria Police launched Operation Sanctuary when two women walked into a police station 13 months ago and made a number of allegations.

A total of 31 suspects have already been charged as part of the operation.

The victims associated with the latest charges are aged between 13 and 25.

The accused men appeared at Bedlington magistrates’ court yesterday to be charged with a long list of offences including arranging child prostitution, false imprisonment andsupplying Class A drugs.

Deputy Chief Constable Steve Ashman, who is leading the investigation, said: ‘Today marks a milestone in this operation. Since the first allegations were made over a year ago we have painstakingly left no stone unturned. To date, this part of the investigation has involved speaking to over 100 potential complainants.

By the way, the white hands in the picture are from a stock photo—as I said before, in these cases all abusers are Muslim, but their victims are white.