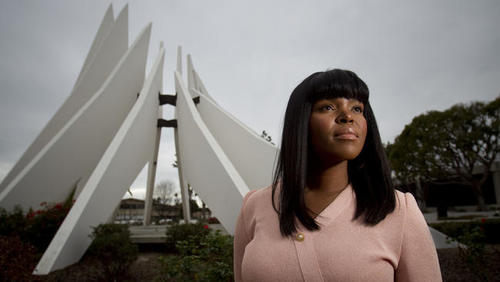 "Crooked Outta Compton"—65% Hispanic City Is Black-Ruled, But The DOJ Is Still Focused On Ferguson

Above, Compton’s mayor in front of the civic center’s MLK monument

Compton’s mayor and council members have been illegally boosting their salaries for years by paying themselves for commission meetings that sometimes lasted only about a minute, the Los Angeles County district attorney’s office said.

In some cases, officials were paid “whether or not the commission member attended the meeting,” the prosecutor’s office said in a July 17 letter to the Compton city attorney. The letter was obtained by The Times on Thursday. …

A 2010 investigation by The Times found the meetings of the highest-paying Compton commissions often lasted the shortest time. The stipends ranged from $300 for the Urban Community Development Commission to $1,000 a month for the Housing Development and Gaming commissions. Council members also earn $1,100 a month for sitting on the Public Finance Authority, and the mayor is paid $1,700.

At least 41 commission meetings lasted fewer than 10 minutes, the Times investigation found in 2010. The district attorney’s letter revealed similar findings and said the Housing and Gaming commissions “serve no obvious purpose other than providing additional compensation to the commission members.”

The salary-padding practice predates the tenures of Brown and at least some of the current members of the City Council. Former Mayor Eric Perrodin and some former council members benefitted from the practice, records show.

This is pretty small potatoes stuff — gaveling commission meetings into order and quickly into adjournment to collect a stipend — especially compared to nearby Bell, where the mostly white top city officials fleeced the mostly Hispanic residents for hundreds of thousands of dollars each annually.

Compton, an independent municipality of 98,000 residents a dozen miles due south of Los Angeles’s city hall. Although famous as the onetime home of West Coast gangsta rap, Compton was 65% Hispanic by the 2010 Census, up from 21% Hispanic in 1980.

But Compton is still largely ruled by its outgoing black minority (32.9% of the population in 2010), who are not stingy about erecting monuments to themselves while the getting is still good. Compton has had a black mayor since 1969.

Notoriously gang-prone black neighborhoods in Southern California tend to be surprisingly pleasant looking on their residential streets of single-family homes (although the commercial streets are usually dumpy for at least a decade or two after riots).

A roughly analogous situation in smaller Ferguson, MO where the outgoing whites hold most of the political offices (although, granted, Ferguson offices pay perhaps an order of magnitude less than similar positions in Compton) is, perhaps, the Greatest Crisis of Our Era. But black politicians clinging to lucrative power in Compton is just one of those things. I mean, whaddaya whaddaya? Who ever heard of Compton compared to Ferguson?