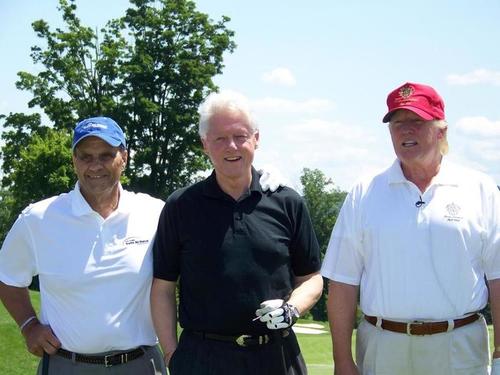 Aug.19 In Clintons’ Town, a Call to Move a Prom Over Donald Trump’s Politics

First there was Univision and the beauty queens, then NBC, then the top chefs. Now, in the heart of Clintonland, another one of Donald J. Trump’s business interests is under pressure because of his remarks about Mexican immigrants: his Westchester County golf club, which hosts high school proms.

August has become a time for political activism for students at Horace Greeley High School in Chappaqua, N.Y. No strangers to politics — after all, this is the suburb where Bill and Hillary Rodham Clinton live — the summer of Trump has crept into summer break.

Disgusted by Mr. Trump’s assertion that Mexican immigrants are rapists and criminals, a group from the public school has started a push to have their senior prom relocated from his nearby Trump National Golf Club, the white-glove catering place in Briarcliff Manor, N.Y. — about seven miles west of Chappaqua — where it has been held for the last several years.

… Students at Horace Greeley High School in Chappaqua, N.Y., want their prom moved from Trump National Golf Club, which is owned by Republican presidential candidate Donald Trump. The group of students said that it was “disgusted” by Trump’s “racist” comments on Mexican immigrants and started “developing a case against giving business to Trump,” according to the New York Times.

Unmentioned in Alan Rappeport’s story, however, is the fact that when people play golf with Bill Clinton, he takes them to play at Trump National Golf Club.

“I play at the Trump course [in Westchester],” Clinton told Golf Digest in 2012 when asked whether he belongs to any golf clubs. “When people come to play with me, that’s where I take them. I have a membership there.”

Clinton gets the celebrity treatment at the course. He “practically [has his] own wing in the locker room at Trump National Golf Club,” according to Westchester Magazine, which also notes that both Clinton’s handicap and his tee times are a “state secret” at the club.

Clinton has a locker in an exclusive row of lockers shared by the likes of former Yankee manager Joe Torre, former New York City Mayor Rudy Giuliani, and Trump himself, who is a fantastic golfer with a single-digit handicap that you wouldn’t believe.

I can believe that.

… As a 65th birthday present, Hillary and Chelsea Clinton, who also brought along husband Marc Mezvinsky, joined Bill for a round.

“This year on my 65th birthday … Hillary and Chelsea and Marc took me to the golf course, to Trump,” Clinton said in the Golf Digest interview. …

“Chelsea hadn’t played since she took lessons when she was at Sidwell, and Marc never plays,” he explained. “The Trump people were great: They organized all their tee times so we wouldn’t delay anybody. We schlepped around nine holes together.”

Clinton’s use of the nearby Chappaqua course is not just for convenience.

When he is out of town, he gravitates toward Trump courses as well. In 2012, he stayed in one of the suites at Trump’s private Mar-a-Lago Golf Club in Palm Beach, Fla.

Trump is proud of the fact that Clinton belongs to his club. A picture of Clinton, former Yankee manager Joe Torre, and Trump is featured on the course website.

… Hillary Clinton’s campaign did not respond to an inquiry into their club membership.

I’m guessing Clinton will publicly resign his Trump National – Westchester membership in protest about the time the first snowflakes of the winter fall.
[Comment at Unz.com.]