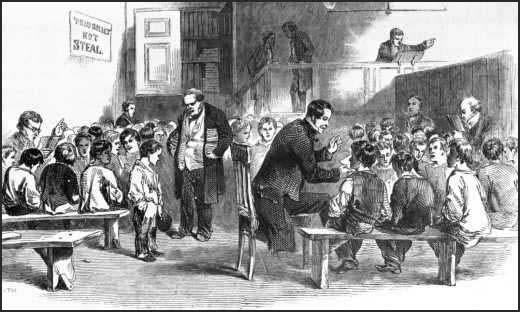 Over at Marginal Revolution, Tyler Cowen links to a study of why child labor expanded so much during the laissez-faire era of the industrial revolution. The comments are mostly the usual libertarian chest-pounding, leading up to Roy Swanson's:

I got my first job when I was nine. Worked at a sheet metal factory. In two weeks, I was running the floor. Child labor laws are ruining this country.

On second reading, I've come to believe this is a pitch-perfect parody of 21st Century libertarianism. Having never worked in a sheet metal factory, I couldn't say for sure, but I would guess that there are a lot of opportunities for sheet metal workers to lose fingers or even heads without adequate adult supervision.

[Update: Commenters have pointed out that Rob Swanson is the libertarian Tea Party government bureaucrat (the one who looks like Teddy Roosevelt) on the TV sitcom Parks and Recreation.]

When I was majoring in economics, history (especially of Britain), and business at Rice in the 1970s, child labor in Dickensian England was a major intellectual sore spot.

The libertarians were just beginning their ascendance in the academy. Rice, a science / engineering-focused college in the booming oil capital of Houston, was unusual among elite universities because its faculty averaged less to the left than was the norm in the 1970s. While the economics department was increasingly libertarian, it was striking at the time that even the history department had two star converts to pro-market ideas in Allen Matusow and Martin J. Wiener, who is obscure in America but subsequently became hugely controversial in England in the early 1980s because of his influence on Thatcherism via Keith Joseph.

A major PR problem for laissez-faire ideas back then, however, was the extremely well documented history of a previous era when laissez-faire ideas had been dominant: in England in the first 3/4ths of the 19th Century. In particular, nobody who read about the era wanted to go back to not regulating child labor.

Since then, the Dickensian Era has become less of a problem for intellectual libertarians. People don't read Dickens as much. Nobody watches Oliver! the 1968 Best Picture winner (I played Oliver Twist's grandfather, Mr. Brownlow, in the St. Francis De Sales elementary school's 1970 production of Oliver!). Time passes and less and less is remembered.

Over the centuries, laissez-faire argumentation for low wages has shifted from insisting upon the iron necessity of child labor to the wonderfulness of open borders. But the combination of monetary interest driving intellectual arguments remains very similar.

Perhaps the best critique of the ideological rigidity of laissez-faire England comes from Paul Johnson's 1972 A History of the English People. This preceded his famous conversion to neoconservatism in the brilliant Modern Times of 1983. But in 1972, Johnson was the last heir of Orwell in his English patriotic democratic socialism. In VDARE.com in 2007, I explained how Johnson's analysis could be applied to current debates over immigration:

We don't think of the British as being terribly ideological. But during the second quarter of the 19th Century, their justifiable national pride in developing economics for once overwhelmed the vaunted British common sense. A dogma based on a crude interpretation of the works of Malthus and Ricardo presumed that low wages were crucial to profits, just like the sophomoric economics of today's open borders crowd.

Back then, the ruling class didn't fulminate over plucking chickens but over sweeping chimneys.

Consider the fates of the little boys, from age four on up, who were widely employed by master chimney sweeps to clamber up inside long flues and knock down the soot, at horrific cost to their health. Paul Johnson writes in A History of the English People (p.285), "often they were forced up by the use of long pricks, and by applying wisps of flaming straw to their feet. They suffered from a variety of occupational diseases and many died from suffocation."

The ruling ideology of the age assumed that, as regrettable as this might be, the laws of economics required it.

After all, how else would chimneys ever get swept?

The first bill banning the employment of children under eight from chimney sweeping passed Parliament in 1788. But, like many immigration laws in America today, it was ignored. So was the 1834 act.

Then, the greatest reformer of the Victorian Era, Anthony Ashley Cooper, the seventh Earl of Shaftesbury, began his almost endless crusade to abolish child labor inside chimneys. Like William Wilberforce, the victor over the slave trade, Shaftesbury was a Tory, an evangelical Anglican, and a relentless parliamentarian.

In 1840, Shaftesbury carried a bill to regulate child chimney sweeps over " resistance that can only be called fanatical", in Johnson's words.

It also was not enforced.

Three more of Shaftesbury's bills failed in Parliament in the 1850s. He succeeded in 1864, but the legislation proved ineffective "due to a general conspiracy of local authorities, magistrates, police, judges, juries, and the public to frustrate the law. Boys continued to die…" including a seven-year-old who suffocated in a flue in 1873.

And, of course, that winter everyone in Britain froze to death due to clogged chimneys.

Oh, wait … sorry, that was in Bizarro Britain, where the reigning interpretations of economics actually applied. Rather like in Senator Kennedy's Abnormal America, where nobody will be able to afford to eat chicken without the Liberal Lion's amnesty and guest worker programs.

In the real Britain, however, the master chimney sweeps quickly found other ways to clean chimneys.

And, equally, Americans will not starve if they are deprived a continuous influx of uneducated foreigners.

What we've learned since the early Victorian Era is that the world works in ways more responsive to intelligent effort than was imagined by Thomas Malthus:

In contrast to Dickensian England, with its Scrooge-like obsession with cheap labor, Americans traditionally enjoyed high wages because the country was underpopulated relative to its natural resources. This inspired American entrepreneurs to invest in labor-saving innovations, which, in a virtuous cycle, allowed even higher wages to be paid.

The most famous example: Henry Ford doubling his workers' salaries in 1914 after inventing the moving assembly line.

In the long run, the cheap labor obsession debilitated the English economy. After the brilliant innovations of the early Industrial Revolution, the English textile industry tended to stagnate. Paul Johnson explains:

"Factories paid higher wages than domestic industries; all the same, they were very low, chiefly because most of the factory hands were women and children. Low wages kept home consumer demand down; worse still, they removed the chief incentive to replace primitive machinery by the systematic adoption of new technology."

And then there was the long run impact on Britain's economic culture:

"State limitations of human exploitation came too late, and were too ineffective, to make the quest for productivity a virtue; the English did not discover it until the twentieth century, by which time the trade union movement had constructed powerful defenses against it."

Victorian Scroogeonomics helped engender its own nemesis. It drove the British working class far to the left of the American working class, leading to both the nationalization of major industries in the 1940s and a hatred of productivity improvements among unions, exemplified in the 1959 Peter Sellers' movie I'm All Right, Jack.