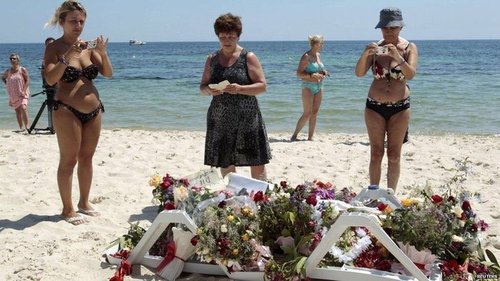 As timid and donor-whipped as our GOP politicians are, Britain's are even worse, if you can imagine that.

How useless are they?  So useless, even The Economist has noticed!

Following the June 26th beach massacre in Tunisia, in which 30 British vacationers were killed, David Cameron put on his angry face and promised to do things.

To show his government was nonetheless on top of the global jihadist menace, David Cameron, the Tory prime minister, additionally assured Parliament that: “defeating this terrorist threat requires us to do three things”. Whereupon, he read out a list of things his government was already doing. [Death on the Beach by "Bagehot"; The Economist, July 4th 2015.]

The week before the massacre Cameron had made a speech in Slovakia boldly and fearlessly suggesting that all things considered, and with due allowance for community sensibilities, Muslims in Britain perhaps should not tacitly support ISIS.

"The question is: How do people arrive at this worldview?" [Cameron] said one reason was members of the Muslim community who "don't go as far as advocating violence, but who do buy into some of these prejudices." [Cameron warns of "quietly condoning" IS ideology; BBC News, June 19th 2015.]

Even that was too much for the grievance lobbies.

Massoud Shadjareh from the Islamic Human Rights Commission said it was "misguided and dangerous" to suggest that the solution was to tackle the ideology of Islam.

Not to worry, Mr Shadjareh.  In that same speech Cameron vowed to increase Britain's Muslim population.

Mr Cameron also said the UK would work with the UN to "modestly expand" the numbers of Syrian refugees it takes.

The UK has previously committed to take in 500 migrants from Syria over three years. Sources indicated that the government was now prepared to accept "a few hundred more."

Back to The Economist.   "Bagehot" notes the emptiness of Cameron's post-massacre talk.

Mr Cameron’s promised change may be little more than rhetorical. In practice, it appears to consist mainly of a new, probably unenforceable, responsibility for schools and universities to report signs of extremism among their students. It would then befall the few dozen civil servants dedicated to responding to such warnings, who are already overstretched and of mixed ability, to act. “The rhetoric is always tougher than the reality,” says [Muslim activist Dilwar] Hussain. “Probably this means little.”

Why are Cameron's words so empty?  Because language is the dress of thought.

It is tempting to note that this is often the case with Mr Cameron. The Tory prime minister is a talented communicator and nimble crisis manager, but a shallow thinker.

That's being nice.  My own impression is that Cameron is not capable of connected thought at all outside the tight media-patrolled boundaries of globalist-liberal conventional wisdom.

Set that aside, however: it is not as if anyone, anywhere, has a more convincing plan for ending the jihadist scourge.

No, I don't have such a plan, either.  I do, though, have some ideas for keeping Islamist violence contained in the 49 countries where Muslims are currently a majority.

If Mr Cameron feels that my input might be useful, I can be reached c/o VDARE.com.