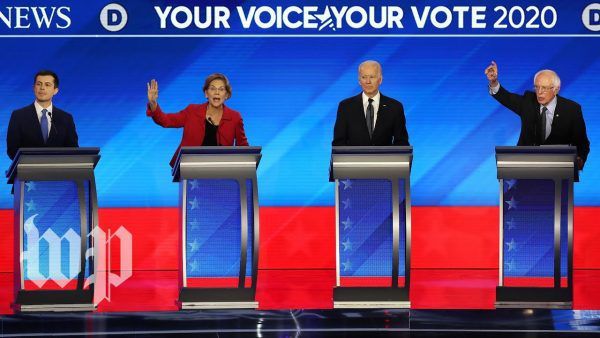 During New Hampshire Democrat Debate, Elizabeth Warren Advocates for "Race-Conscious Laws" to Uplift Blacks at the Expense of White America

Hate Donald Trump as President of the United States of America all you want, but he has never, ever engaged in the type of anti-white dialogue the Democrat candidates for their party’s nomination for POTUS did during a televised debate on February 6, 2020.

It isn’t a stretch of the imagination to state each candidate is doing their best to out anti-white the other candidates in their rhetoric, with long-time fake Amerindian Sen. Elizabeth Warren leading the way.

With all Democrats hopeful that support from communities of color can give them an edge over President Donald Trump, Sen. Elizabeth Warren at Friday night’s debate pressed for “race-conscious laws” on a range of issues including criminal justice reform, housing and education.

For the same crime, she said, African Americans were far more likely to be detained, arrested, tried, wrongfully convicted and receive harsher sentences.

She also noted that the country discriminated against African Americans by blocking them from buying homes in certain neighborhoods until 1965, and “you can’t just repeal that and say everything is even. It’s not.”

She called for adjustments in legislation and investments that could boost education, employment and entrepreneurship in communities of color.

Warren was challenged by businessman Andrew Yang, who said “you can’t legislate away racism.”

Yang and billionaire Tom Steyer called for reparations programs, with Yang specifically pushing for a guaranteed minimum income of $1,000 per month that would help “reshape our communities of color. We can’t regulate (racism) away through any other means except by” giving black and Latino people “buying power.”

Sen. Bernie Sanders of Vermont, who has led recent New Hampshire polls and is neck-and-neck with Buttigieg with Iowa results still contested, said he agreed with Warren. Sanders described a “system that is broken and racist” and called for investments in health care, young people, jobs and education, not “more jails and incarceration.”

“We need to end the war on drugs which disproportionally impacted African Americans and Latinos,” he said, adding that he called for an end to private prisons.

“There’s no excuse that white families have 10 times more wealth than black families,” Sanders said. “No excuse for black women dying in child birth at three times the rate that white women do.”

Former Vice President Joe Biden, who has led in national polls and has strong support among African American voters, said “We’ve got to stop taking the black community for granted.”

Biden pushed for investments in rehabilitation centers, not prisons, and mandatory treatment instead of mandatory prison time.

“We should be investing our money in communities that haven’t gotten help for a long time,” Biden said.

Might be wrong, but candidate Donald Trump in 2015-2016 never once spoke of going directly for the white vote, but instead utilized so-called dog-whistling on topics the dwindling white majority in America were uniquely interested in; meanwhile Democrats in 2019/2020 go out of their way to denounce white America every chance they get, promising all types of programs and monetary gains (paid for by the white taxpayer) exclusively to non-whites if they are elected.

Biden is right, though, as we should be investing U.S. taxpayer money in communities that haven’t gotten help for a long time, but he is entirely wrong in identifying which community has been denied this capital (for it has been redistributed to every community save their own): White America.

Trump will continue to tout low black unemployment, while Democrat candidates will ceaselessly advocate for greater restrictions upon the freedoms white America is allocated, all in the name of fighting for Diversity, Inclusion, and Equity.

And as Steve Sailer has duly noted, this advocacy clearly translates to one clear future for whites in America, an all-too-easy to understand acronym: D.I.E.

We cannot just say that criminal justice is the only time we want to talk about race. We need race-conscious laws. #DemDebate pic.twitter.com/FA0BeuPYYv