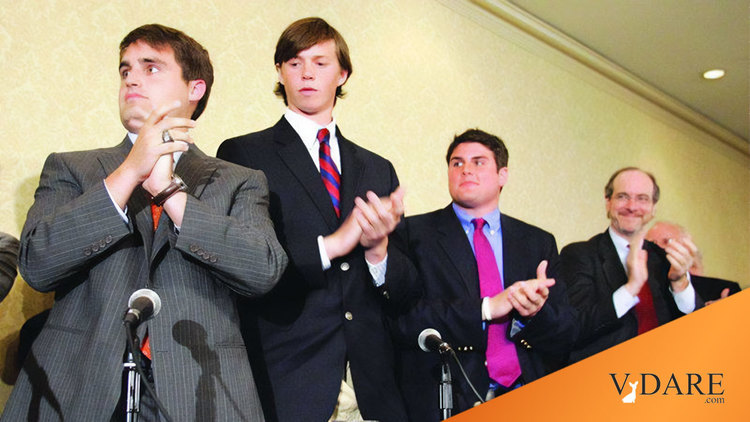 WBAL Baltimore's Ron Smith has a commentary on the station's website, [Another Example of Unequal Justice, May 08, 2006] on the Duke malicious prosecution case.

In his column in The American Conservative, Taki says the story “stinks to high heaven – and the New York Times coverage of it even more so.”[Guilty Until Proven PC, May 22, 2006] He quotes the managing editor of the “Old Bag,” Jill Abramson as saying of the paper’s future: “We believe in a journalism of verification rather than assertion.” He then asks how that can be when she runs the sports columns of Selena Roberts, who has written that the alleged victim “was raped, robbed, strangled and was the victim of a hate crime.” The guilt of the accused is assumed, asserted without any proof, totally contrary to Abramson’s above statement.

(While Taki wrote that for The American Conservative, at the moment it's only available on his personal website, takistopdrawer.us.)

As Steve Sailer points out, the MSM, while totally obsessed with the Duke rape case, is uninterested in the stories of three minority football players who got in trouble with the law and were charged with felonies (one assault, two rapes) in the last two weeks:

Chicago Bear defensive back Ricky Manning Jr. was charged with assault with a deadly weapon against some stranger who apparently offended him by working on a laptop computer in a Denny’s restaurant. Utah State quarterback Jerod Walker was charged with raping a coed, as was USC quarterback Mark Sanchez. “ Yet none of these cases,” writes Sailer, “have received a fraction of the attention that the Duke Lacrosse team has garnered – even though football is the most popular sport in America and lacrosse is close to being the most unpopular.” Sailer’s exploration of why this is so is absolutely must reading.

Because what you read on Vdare.com, you won't read anywhere else.