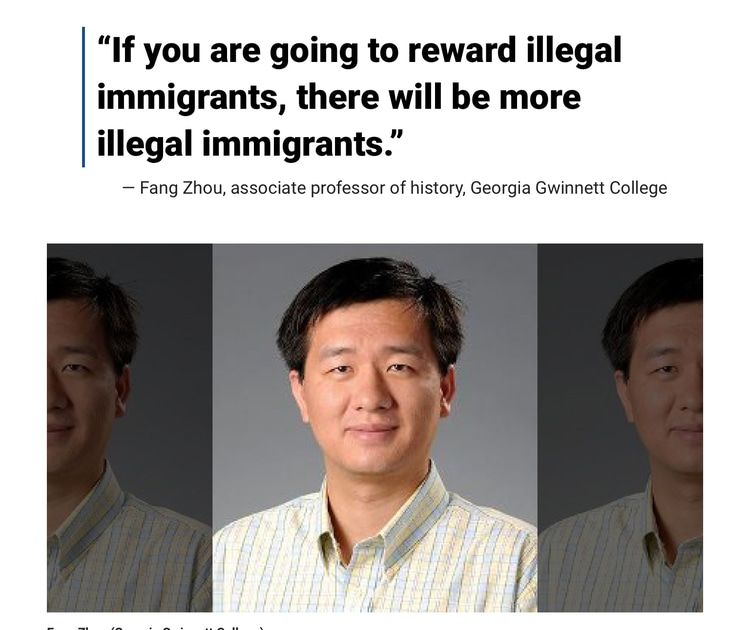 If you subsidize something, you get more of it. This is a rule that everyone in the conservative movement understands, except when it comes to illegal immigration.

Yet a legal immigrant from China is speaking the truth about illegal immigration. Not surprisingly, there is an attempt to get him fired, led by a member of Georgia's House of Representatives.

Zhou says he welcomes the criticism, including from those who say he should lose his job, according to the report.

“My students are ‘woke’ and are overwhelmingly against illegal immigration after taking my class,” he added.

Rep. Bee Nguyen [email her politely] is following the usual script when it comes to getting someone purged. She's posting comments and asking whether the college itself endorses these comments.

Facebook comments he [Zhou] made recently about “ghetto thugs” and “libtards” caught the attention of Georgia state Rep. Bee Nguyen, who demanded an explanation from the college.

“Are these the values supported by Georgia Gwinnett College?” Ms. Nguyen wrote, including screenshots of Mr. Zhou’s comments...

“I have concerns about him teaching those things in a classroom,” she told the Journal-Constitution.

Gwinnett College responded to the Journal-Constitution’s request for comment by referring the outlet to its academic freedom policy, which allows faculty to speak freely.

Mr. Zhou said he doesn’t force his students to share his opinions on illegal immigration.

“Everybody has free speech, so [Ms. Nguyen’s] welcome to complain,” he told the Journal-Constitution.

There's an interesting ethnic angle here. On the one hand, we have the first Vietnamese-American elected to the Georgia House leading this campaign against this professor. On the other, we have a Chinese legal immigrant speaking in terms that many white professors, even conservatives would shy away from.

The Chinese term for the "white left," Baizuo, fits in here. The "white left" is obsessed with concealing obvious truths about race and sex. Because we are so immersed in the poisonous mass media climate of far-left radicalization, we are like the fish in water. We don't notice how extreme everything has become; we don't realize how ridiculous it must seem to an outsider.

However, any foreigner not being lectured by hostile media constantly would immediately understand something is wrong.

Of course you can't let foreigners just illegally parade into your country in unlimited numbers.

Of course, some groups commit crime at higher groups than others.

Of course "ghetto thugs" must be restrained, not rewarded.

It's no wonder the MSM is so desperate to censor these common sense views. Once you step outside the bubble, how can anyone rational disagree with what we are saying?