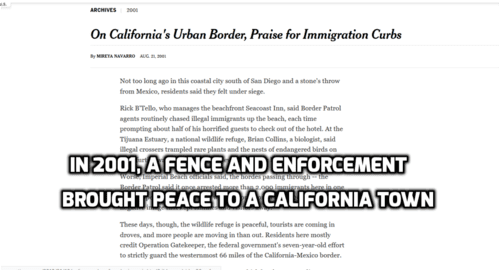 CNN Doesn't Want To Know About The Fence That Worked—But We Know, And Have For Years

A brief note from Instapundit: Well, you know what they say:

It doesn't only reflect badly on Democrats, though. In 2001, the late Sam Francis discussing the success of the San Diego fence, wrote an article called The Future That Works (Despite Dubya): Illegal Immigration Can be Controlled.

He was talking about an article called On California's Urban Border, Praise for Immigration Curbs, By Mireya Navarro, NYT, August 21, 2001.

The New York Times reports that in the oceanside city of Imperial Beach, just south of San Diego, the U.S. Border Patrol has constructed a fence to keep out illegal immigrants. The fence works. Not only are the illegals few and far between in the area now, but the quality of life as well as the economy have improved strikingly.  [VDARE note: Click here for a letter to the Times which advises residents of Imperial Beach to relax and enjoy the invasion.]

Prior to the fence, illegals poured over the border and through the town—over the beaches, across private property, frightening tourists as well as residents and inciting hotel guests to pack their bags and head somewhere else for a vacation. In one 24-hour period, the Border Patrol nabbed no fewer than 2,000 aliens sneaking over the border. The uncontrolled immigration that the open borders lobby bubbles and chirps about so much was wrecking the area—socially as well as economically.

Then the fence went up, as part of an on-going Border Patrol project called "Operation Gatekeeper." The idea is to secure those areas where illegals most frequently cross over, and it's been tried in such places as El Paso and Brownsville, Texas, with similar results.

In Imperial Beach, ever since the fence went up, the "tourists are coming in droves, and more people are moving in than out," the Times reports, and "grateful residents say the stepped-up vigilance has all but sealed the once popular smuggling routes across their beaches, parks and backyards and helped revive the area's economy and improve the quality of life."[More]