Over the past 40-odd years, Southern California has been destroyed by legal and illegal Hispanic immigration, and the lawless gang culture that those Hispanics imposed, as they wiped out the good culture they found. As I showed last summer, in my two-part VDARE series on Anaheim (here and here), the Hispanics now residing in “SoCal” are dominated by gang members and their friends, relatives, and other supporters. (This is also true of the blacks in the region.) When these people scream “racism” and “corruption,” they don’t mean literally what they are saying. For them, racism and corruption are good things! They are just using code words, to complain that the police are doing their job. 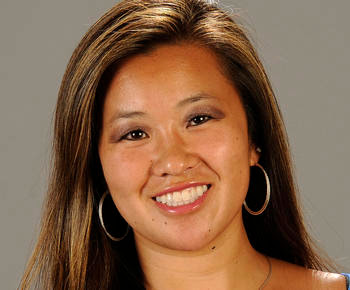 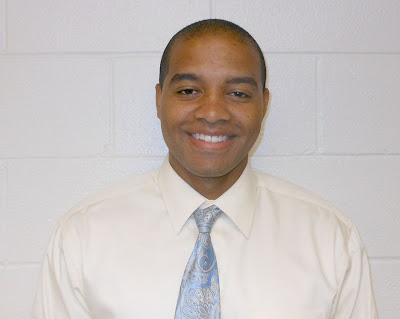 Dorner murder victim Keith Lawrence (Quan and Lawrence were engaged. I have still been unable to learn the name of the murdered police officer from the other ambush, who was Dorner’s third murder victim. My current surmise: Dorner was trying to murder his former training officer, Sgt. Teresa Evans, but Evans survived, and the LAPD is refusing to reveal the names of the dead and wounded officers, respectively, out of justified fear that Dorner will hunt down Evans, and perhaps the others, too, to finish the job.) 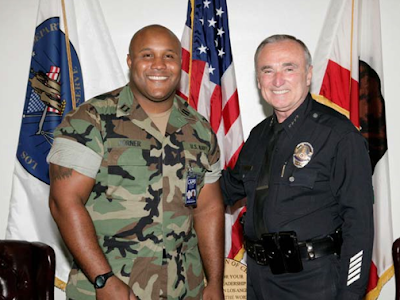 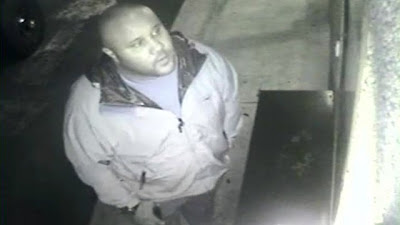 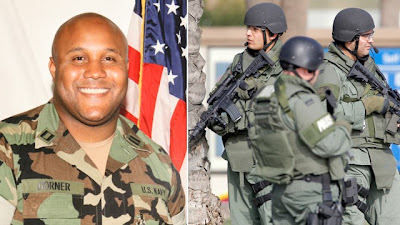 [Previously by Nicholas Stix on this monster:

“Is Spree-Killer Christopher Dorner Still Alive? While Suspect Has Not been Heard from in Days, Sissy, PC LAPD Chief Charlie Beck Responds to Dorner’s Accusations by Following His Lead, and Re-Opening Case That Led to Dorner’s Firing”; and

The description at Facebook page, “We Are All Chris Dorner.”

There are certain matters that in a virtuous, or even a merely functional society cannot be up for debate. One of them is that no one can just cruise around murdering people. Unfortunately, America is no longer even merely functional, let alone virtuous.

A man decided to start ambushing and murdering people. Because he is black and wrote a leftist manifesto, the MSM have shown him sympathy, calling him “sensitive” and “disturbed,” and called his murders “revenge” killings. None of the murders had anything at all to do with revenge. If someone seriously harms you, or harms or kills a friend or relative or yours and you kill him, that’s out of revenge. Christopher Dorner has already confessed (and his camp followers assume he is guilty) of at least two cowardly ambushes, one in which he murdered two strangers, and another in which he murdered one so far unidentified LAPD officer, and attempted to murder a number of other officers, wounding two.

Of the two strangers, one was the daughter of the lawyer and retired LAPD officer who defended Dorner at the latter’s departmental trial. The other stranger was the lawyer’s daughter’s fiancé. Neither victim had ever done anything to Dorner, and he had not even claimed they had. By no stretch of the imagination, could that double murder be called a “revenge killing.”

As for the murder of one LAPD officer and attempted murder of other officers, while it is possible that one of the targets was Dorner’s former training officer, (then-Officer, now Sgt.) Teresa Evans, it is not clear, even in Sgt. Evans’ case, what Dorner would have been avenging.

One day after then-Officer Evans gave then-probationary Officer Dorner a negative evaluation, he charged her with having used excessive force against an emotionally disturbed person (EDP) two weeks earlier, by kicking the EDP twice in the collarbone and once in the face. However, while the EDP’s nose did have a bloody scratch, there was an innocuous explanation for that (a struggle with Dorner and Evans in some bushes). Moreover, the EDP was wearing a white shirt at the time, which had no dirty shoe marks where Droner said Evans had kicked him twice. As a result of those circumstances, Dorner lost his case before the LAPD Board, again in court, and a third time, in appeals court.

While it is not an open-and-shut case, as to whether Dorner or Evans told the truth about what transpired with the EDP, even if Evans had perjured herself under oath, that still would not justify Dorner’s wave of terror against innocents.

Meanwhile, thousands of people in Southern California who assume that Dorner has indeed killed three people, and wounded at least two others, have voiced support for him, claiming that he is a “liberator” fighting against (white) “racism” and (white) “corruption” in the LAPD. This is a classic Big Lie campaign that was engineered going back at least to the Rodney King case.

The LAPD was guilty of nothing, in the Rodney King case. All of the culpability in that case rested with the late Mr. King. As for the “racism” and corruption” charges, which are explicitly tied to the 1998 LAPD Rampart scandal.

Rampart was a case of a criminal organization of black, Hispanic, and black-Hispanic cops that had taken over a supposedly elite narcotics unit. Blacks and Hispanics and their white leftwing allies have for years turned the truth upside down, making it sound like Rampart was a case of white corruption, in order to terrorize clean, white cops, and cover up for dirty black and Hispanic ones.

And pantywaist LAPD Chief Charlie Beck tries to placate them.

SACRAMENTO (CBS13) – The ex-cop accused of three revenge killings left behind a long manifesto outlining all of his grievances and observations.

That manifesto has given investigators some clues, but they still don’t know where is [sic] Christopher Dorner.

Dorner lost his job with the Los Angeles Police Department in 2008. His manifesto vows revenge for that; and, surprisingly, thousands of people actually support him.

It’s hard to believe but there are those out there who sympathize with the man targeting police officers.

One Facebook page is proclaiming Dorner for president. “We propose electing a man who could no longer sit idly by and watch as malicious tyrants abuse the innocent.”

The description on “We Are All Chris Dorner” chillingly says, “Yes, this is war.”

Nearly 3,000 people like the page “I Support Christopher Jordan Dorner.”

CBS13 posted a simple question: Why? Why support a man wanted for at least three killings and the author of a murderous manifesto promising to target cops?

One sympathizer wrote us, “Because something needs to be done about the long known corruption of not only the LAPD, but several agencies.”

Another comment read, “He is god for now and I support him and this page.”

“Most people would be shocked and appalled that people would support this,” said Sid Martinez, assistant professor of sociology at Sacramento State.

However, Martinez is not surprised by the outpouring of support. He points to a long history of distrust and tension between parts of Southern California and the police, as the motivation behind the movement.

Some are celebrating this former cop turned alleged cop-killer as a vigilante administering a sick kind of justice.

“So, to see someone kill police officers, they may see this as a kind of way of standing against oppressive force,” said Martinez.

A number of fake Twitter accounts have popped up and are only adding to the surprising debate.

Black Murders Of White CopsDiversity Is Strength
<< Previous
Next >>
LATEST