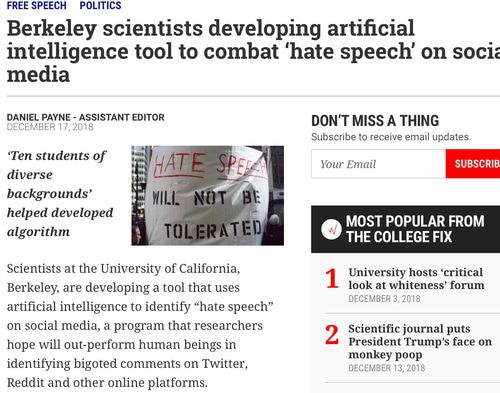 You can have diversity or you can have free speech. Once diversity becomes the foremost good of a society, it follows that speech must be curtailed in order to prevent certain groups from being offended. It also follows that the self-appointed representatives of each group have an active interest in finding reasons to be offended, as that increases their power.

Thus, the Anti-Defamation League, arguably the most powerful of these tribal chieftains, is now developing an artificial intelligence that will police "hate speech" on the Internet. What constitutes "hate" of course will be determined by them. The AI is also being developed by "ten students of diverse backgrounds," all united by the goal of getting Americans to shut up and stop resisting their dispossession.

In addition to artificial intelligence, the program will use several different techniques to detect offensive speech online, including “machine learning, natural language processing, and good old human brains.” Researchers aim to have “major social media platforms” one day utilizing the technology to detect “hate speech” and eliminate it, and the users who spread it, from their networks...

Social medial, if left free, allows ordinary people to organize and spread information. However, it also allows for a narrative to be centrally determined and propagated. If certain outlets are promoted and others are censored, one message and one take on current events can be pushed throughout the entire society. Even a slight change to an algorithm can make or ruin an entire website.

Given universal suffrage and given that most people will believe whatever the dominant narrative is, the person or group that controls social networking controls the "democracy." Journalists, with their endless hit pieces on whatever bastions of free speech exist, further this process of centralization and control. To slightly modify the quote attributed to Nathan Rothschild (among others), "Give me control of a nation's Facebook and Twitter and I care not who makes its laws."