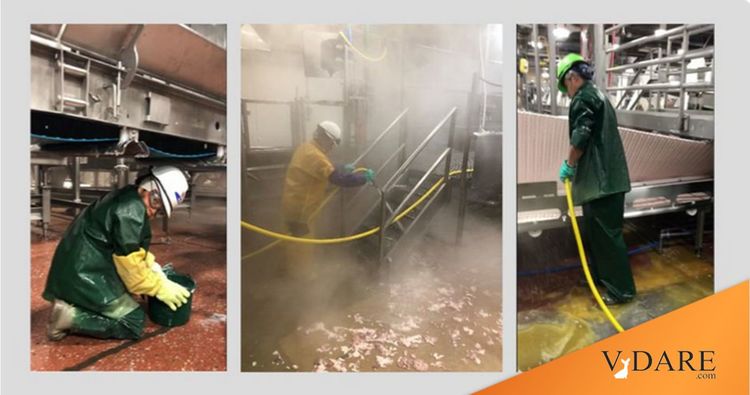 The Department of Labor has accused Packers Sanitation Services, Inc., a company that cleans slaughterhouses overnight, of illegally using “oppressive child labor” in dangerous facilities. While the leftist media frets that PSSI employed “kids” and “minor children,” the question no one has asked, apparently, is whether they are illegal aliens [Food sanitation company accused of employing at least 31 children on graveyard shifts in slaughterhouses, by Julianne McShane, NBC News, November 12, 2022].

A leading sanitation company is accused of employing dozens of children to clean the killing floors of slaughterhouses during graveyard shifts, according to the U.S. Department of Labor. https://t.co/2ogfKv0W3H

“PSSI employs or has employed at least thirty-one (31) minor male and female children, as young as thirteen, to clean dangerous power-driven equipment with corrosive cleaners during overnight shifts at three (3) separate slaughtering and meat packing facilities in Nebraska and Minnesota,” the Labor Department’s complaint says:

The Secretary’s initial evidence review indicates PSSI may employ minor children under similar conditions at its other 400 operations across the country. …

PSSI is employing, or has employed, at least twelve 17-year-olds, fourteen 16-year-olds, three 15-year-olds, one 14-year-old, and one 13-year old across three slaughterhouses/meat processing facilities.

Some of the minors showed up to school with burns and fell asleep during the day, the complaint says.

But here’s the thing: Their parents had to have known, and they allowed it because the jobs helped pay the family bills.

That truth, and the DOL gumshoes’ interviews in Spanish, suggests that the company didn’t just break child labor laws. It also broke the law by employing illegal aliens, unless they had Temporary Protected Status. Illegals with TPS are allowed to work.

Yet not one of the articles I read mentioned “migrants” or “undocumented immigrants,” the leftist Mainstream Media’s propaganda terms for illegal aliens and their children. Neither does the federal complaint.

One would think the complaint would mention it, or that reporters would find that out. Think of the pathos that adds to the story: “Migrant” youngsters are working the graveyard shift at slaughterhouses, near dangerous equipment and using toxic chemicals, to help their families scratch out a living in their new country.