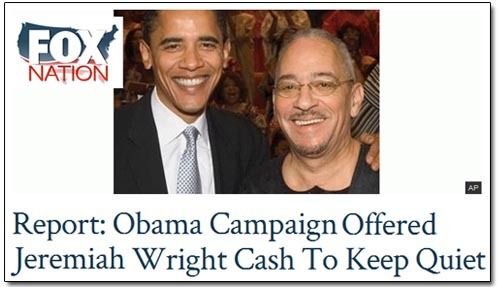 Did Obama Campaign Offer Hush Money to Jeremiah Wright in 2008?

Author Ed Klein discusses Obama’s relationship with Rev. Wright, a relationship he details in great length in his new book, “The Amateur.”

“What happened is that after ABC’s Brian Ross broadcast the audiotapes –videotapes of the Rev. Wright God damning America and slamming whites and slamming Jews and America, he was contacted by one of Obama’s closest personal friends, a guy who travels on Obama’s plane, who plays basketball with him, who goes on vacations with him,” author Ed Klein told Sean Hannity on his nationally syndicated radio program.

“I didn’t name him in the book, but I can tell you who he is. His name is Dr. Eric Whitaker. Dr. Whitaker is the vice president of the University of Chicago Medical Center and he’s a member of Obama’s very tight inner-circle. And he sent an email to a member of the Trinity United Church of Christ,” Klein said. …

Klein reveals that Whitaker sent an email to Rev. Jeremiah Wright, offering him $150,000 to stay quiet and not do any public speeches until after the election in November 2008.

“Chicago politics is one hand feeds the other, as you know. And Eric Whitaker, a very close friend of the Obamas, sent an email to a member of the church saying that the Rev. Wright could get a $150,000 if he would shut up and not criticize Obama anymore,” Klein said.

“Then, after Rev. Wright said, ‘no thank you,’ Obama himself paid a personal call on the Rev. Wright,” he said. The face-to-face meeting took place in March 2008, 10 days after Obama’s famous “race speech” took place.

“Now we know that this is true, not only because the Rev. Wright told me so, but because the Secret Service logs logged in this meeting. So we have confirmation that it actually took place,” Klein said.[Links added]