Dictionary.com has announced that their word of the year is Xenophobia:

At Dictionary.com we aim to pick a Word of the Year that embodies a major theme resonating deeply in the cultural consci 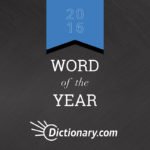 ousness over the prior 12 months. This year, some of the most prominent news stories have centered around fear of the “other.” Fear is an adaptive part of human evolutionary history and often influences behaviors and perceptions on a subconscious level. However, this particular year saw fear rise to the surface of cultural discourse. Because our users’ interest in this overarching theme emerges so starkly for one specific word in our trending lookup data, xenophobia is Dictionary.com’s 2016 Word of the Year.

The word xenophobia is actually relatively new, and only entered English in the late 1800s. It finds its roots in two Greek words, xénos meaning “stranger, guest,” and phóbos meaning “fear, panic.”

Dictionary.com defines xenophobia as “fear or hatred of foreigners, people from different cultures, or strangers.” It can also refer to fear or dislike of customs, dress, and cultures of people with backgrounds different from our own. 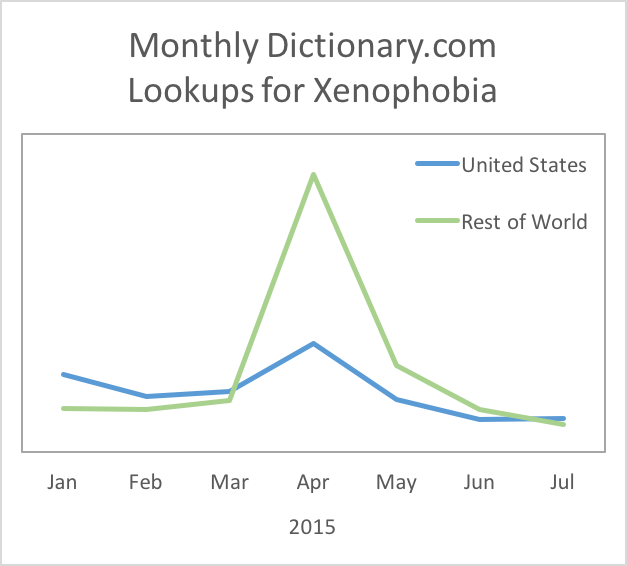 Within the recent past, we can date user interest in the term xenophobia to April 2015, when there was a massive surge in lookups that was larger than any of the peaks seen in 2016. This spike in lookups was connected to attacks on foreign workers and overall rising xenophobia in South Africa. While lookups for xenophobia in the US also rose during that time, it was lookups from Dictionary.com’s worldwide users that made this particular surge so significant.

The largest spike in our data for the term xenophobia this year occurred on June 24 with a 938% increase in lookups—that’s hundreds of users looking up the term each hour. This was the day after the UK voted to leave the European Union as the result of a much debated referendum, also known as Brexit. Another lookup trend that was influenced by the Brexit vote: user interest in the term hate crime soared in the month of July as newspapers covered an increase in crimes motivated by prejudice in post-Brexit UK. In October, the British Home Office reported a 41% increase in hate crimes the month following the EU referendum.[Emphasis added] 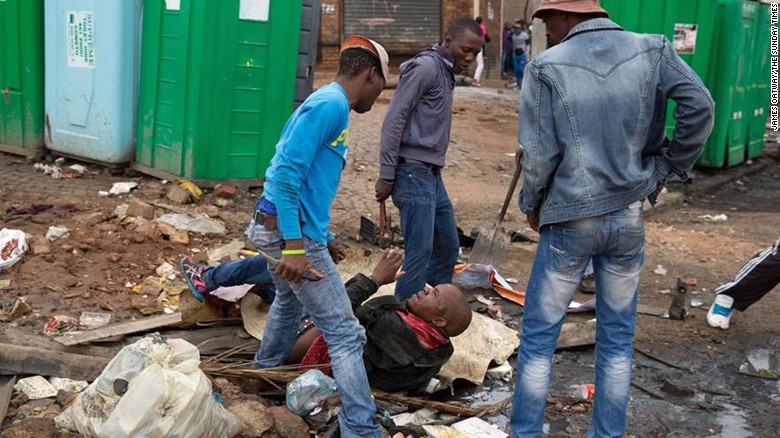 The spike is related to propaganda efforts by the Brexit-hating  media and British government.  (Note how a mostly  41 percent increase in "hate crimes" was announced immediately, but it took them ten years to find out about grooming.)

In the US, the massive interest in the word "xenophobia"  was fueled by anti-Trump hate—some of which came from the current President of the United States:

Soon after Brexit, the second largest surge in lookups this year for the term xenophobia leads us to the 2016 US presidential race. On June 29, President Obama gave a speech in which he expressed concern over the use of the term populism to describe Donald Trump’s political rhetoric. Obama insisted that this was not an example of populism, but of “nativism or xenophobia.” The biggest spike in lookups for the term populism occurred on June 30 as a result of Obama’s speech.

Apparently a lot of people who listen to Obama speeches had simply never heard of populism.  And then, of course,  we get "xenophobia" as fear of "the other":

Xenophobia and Fear of the Other

A related term that often comes up in the context of xenophobia is otherness: “the quality or state of being perceived or treated as different, foreign, strange, etc.” Otherness has existed in English since the 1500s, though its early uses were often in the context of a spiritual transcendence beyond the human experience. By the 1800s, otherness was regularly used in reference to cultural foreignness.

Xenophobia and otherness are often discussed in the context of one another, but they’re distinct both in their origins and their historical use. While the etymology of xenophobia explicitly links it to the psychological response of fear, otherness can be thought of in terms of sociological identity, defining what is normative by naming what is not. Similarly, the terms xenophobia and racism often come up together. While they are distinct phenomena, racism is often the basis of xenophobia—boiling simply down to the sentiment, “I don’t like you because you don’t look like me.” 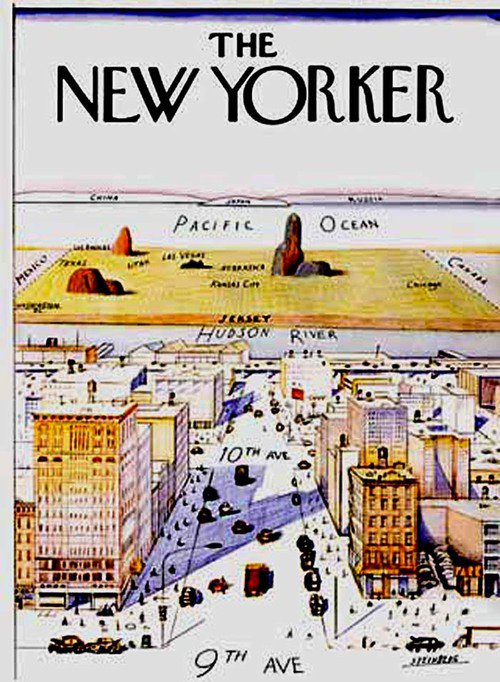 You see a lot of xenophobia in American life, and the worst of it seems to come from the MSM at places like the New York Times and the Trump-hating New Yorker magazine.

For them, the "Other"  is a white American  from a red state who wears a Trump hat, owns a gun, and works for a living.  Years ago, Joseph Sobran pointed out in National Review that

“…abounds in words for the hostility of the native for the alien, the majority for the minority, the respectable for the marginal, white for black, Christian for Jew, and so forth. We have prejudice, bigotry, racism, anti-Semitism, nativism, xenophobia, bias, discrimination, and so forth. But these words are themselves prejudicial: They sum up, one-sidedly, a vast range of sentiment and behavior without admitting reciprocal moral realities: the hostility of Jew for Christian, black for white, marginal for respectable, minority for majority, alien for native, abnormal for normal…

“…If we can sum up the worst attitudes of one side in the term “Nativism”, then we ought to have some such term, as “Alienism” (with apologies to the psychiatric profession) to sum up those of the other.”

The Natives Are Restless, By Joseph Sobran, National Review, February 22, 1985

Perhaps "Alienism" can be Word of the Year sometime in Trump's Second Term.