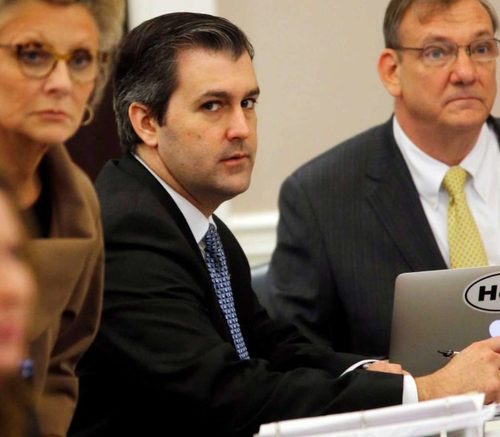 There is only one black on the 12-man jury trying the Michael Slager-Walter Scott murder case, and yet black judge Clifton Newman appointed him jury foreman. And while Michael Slager’s defense team (right, with Slager) built their defense around showing, through expert witnesses, that: Judge Clifton Newman disallowed the witnesses’ testimony, and thus killed Slager’s defense.

A doctor was not allowed to explain how Walter Scott’s cocaine use might have thrust him into a “fight or flight” situation, a possible alternative reason for why Scott ran from a traffic stop and resisted arrest. Prosecutors have said Scott was simply scared of going to jail.

Defense attorneys also could not ask the officer’s former supervisor what Slager said that day about a struggle with Scott and his ensuing decision to open fire.

Lead attorney Andy Savage argued that other officers had already testified for the prosecution about Slager's accounts. At one point, he turned to prosecutors, exasperated over their reasons for blocking the supervisor’s testimony.

“Is it too much trouble to ask what the problem is?” he asked while jurors were not in the courtroom. “I don’t have ESP.”

Three of five defense witnesses who took the stand Tuesday were not permitted to give certain testimony. Only one expert, who talked about the yellow paint on Scott’s cellphone and Slager’s Taser, went unchallenged altogether.

Twelve defense witnesses in all, including Police Chief Eddie Driggers, have testified over four days, but objections and the resulting orders from Circuit Judge Clifton Newman have scuttled elements that the defense saw as crucial. Slager's family members often watched and nodded their heads at the rulings. The trend is expected to continue as prosecutors plan challenges of future witnesses.

When Newman excluded Slager’s statements to a supervisor, Savage twice asked the judge to reconsider. Newman rejected the lawyers' arguments and, a few times, refused to listen altogether.

“It’s just not admissible according to the law … and my view,” Newman said. “The rules as well.”

Much of the disputed testimony has centered on Scott’s character and others' opinions of Slager's handling of the episode that led to Scott's death. Earlier this week, prosecutors successfully objected to a witness who planned to testify that Scott had been fired from a job over a positive cocaine test. The defense also wanted to delve into Scott’s failure to pay child support while earning a $50,000 salary at the job.

“All (the defense) wants to do is smear Mr. Scott’s character,” Chief Deputy Solicitor Bruce Durant said at one point.

Slager's attorneys have said that Scott's actions and the policeman’s own predicament on April 4, 2015, forced him to open fire in self-defense even as Scott ran away. But they have struggled to reconcile that case with court rules that limit certain evidence and the judge’s interpretation of the standards.

The stakes are high. If he’s convicted of murder, Slager faces between 30 years and life in prison. The prosecution, meanwhile, has pushed back against the defense’s approach in a case that comes amid nationwide criticism of police uses of force against black people.

Slager pulled over Scott's car for a broken brake light.

The stop seemed normal. And Sgt. Ronald Webb, Slager’s supervisor who wasn’t on duty that day, said he had never heard any complaints of racial profiling against the officer. Race has been rarely mentioned during the trial.

“He was a very good officer,” Webb told the jurors.

But Scott soon ran, and the policeman chased him. Slager said Scott grabbed his Taser in the struggle that followed and turned it against him.

Dr. Thomas Owens, a medical examiner from Charlotte hired by the defense, said minor wounds on Scott's hands, arms and head indicated he had been in a struggle. But prosecutors objected to Owens discussing “excited delirium” in which users of drugs like cocaine can be thrust into aggressive behavior.

The defense had envisioned the testimony, coupled with toxicology results showing cocaine in Scott's body, as “actual evidence” of a possible reason for his resistance, attorney Donald McCune said. The prosecution had already speculated that Scott ran because of a child support arrest warrant, McCune argued, but the judge wouldn't allow the defense theory, dubbing it speculation.

Still, jurors learned that cocaine users tend to have a higher threshold for pain and can experience “euphoric excitement."

When Slager and Scott got back to their feet during the encounter, Scott started running again, a video filmed by an eyewitness showed. The Taser bounced along the ground. Slager fired eight times; five bullets hit Scott.

To further show what happened before the shooting, along with Slager's rationale for resorting to lethal force, his defense team enlisted testimony from experts and the officers who once worked with him.

Webb said he went to the scene, where Slager demonstrated how Scott was alleged to have grabbed the officer’s Taser. But prosecutors argued that such testimony would be “self-serving” for a defendant like Slager, who has not testified himself. The judge agreed, adding that prosecution testimony from other officers had been corroborated by multiple policemen. Webb had talked to Slager one on one.

Instead, the questioning shifted to after the shooting. Webb was asked to describe the lawman’s demeanor, to say whether Slager was in shock.

“The lights were on; nobody was home?” Savage asked, evoking laughter in the courtroom.

“There you go,” the witness said.

‘Department … not on trial’

The defense team has stressed that Scott’s death arose from Slager’s job and that North Charleston Police Department polices had played into the officer’s dilemma that day.

Slager had been encouraged to make daily stops, he had little immediate backup to help him, and he went through limited training that exposed him to stressful situations when deciding whether to use force.

The officer suffered from those practices, the defense has said.

To make one point, Savage handed the police chief a sheet that broke down how much money North Charleston brought in through the tickets that Slager issued over his career. The attorney offered it as an indication that officers' statistics were being watched.

“I have never seen this before,” Driggers said of the document.

Slager also had been left “alone by himself in a high-crime neighborhood,” Savage said. Four of the seven officers on the team were absent that day. With his partner busy on another call, Slager was patrolling the troublesome Charleston Farms community.

The judge had allowed Driggers’ testimony about policies despite the prosecution's stance that they were irrelevant to the case.

“The defense has a right to put on a defense according to the defense’s theory,” Newman said. He also issued caution, saying, “The department is not on trial, but Mr. Slager is.

"The jury has to determine this case."

But one point that the defense sees as important was conveyed Tuesday: that Slager had followed the rules before the shooting.

To Driggers, Slager's 14 uses of a Taser over his career "seemed high," the chief said. But his use of it against Scott last year was in line with policy.

Slager often leaned on the stun gun to bring down suspects, former New York City police official and Pace University criminal justice professor Darrin Porcher added in expert testimony for the defense. But Porcher said that Slager's past uses of a Taser seemed sound and that the officer had been right to use it against Scott, a suspect who had not complied with any commands to stop and had not been subdued with any other techniques.

But Porcher was asked only once about the shooting itself, the reason Slager wound up in jail.

“Even after the first shot," Savage said, "was there any indication of compliance?"

"No, sir," the defense witness said.

Defense lays out its case in Slager murder trial A paint analyst, a doctor with insight on cocaine use and Michael Slager's former supervisor testify Tuesday in his murder trial.

Watch the live stream of the murder trial of ex-North Charleston officer Michael Slager in the shooting death of Walter Scott and follow along with our live blog here.