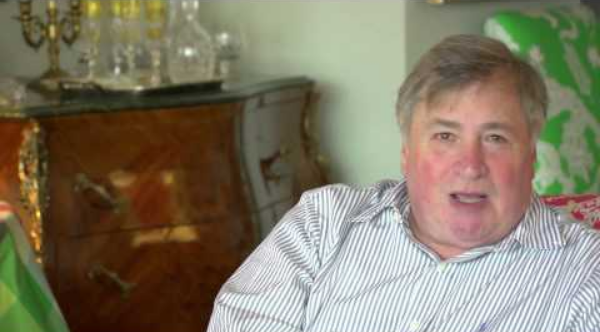 Dick Morris's Amazing Historical Error On The Black Vote, And Its Implications For The Hispanic Vote

Dick Morris is normally one of the most knowledgeable guys in politics, but in his latest video, Winning on Immigration Reform Dick Morris TV: Lunch ALERT!, he makes a staggering historical error.

He’s trying to make the case for Republican support for amnesty, as a way to get the mythical Hispanic vote, and tries to explain why blacks vote 98 to 100 percent Democratic.

He reminds us of the  old Black Republicans, who had Lincoln Republican Clubs in the North and South, and says that it was Barry Goldwater’s single, principled vote against the Civil Rights Bill which made blacks change parties.

This is just wildly wrong—blacks were voting Democratic on economic and other grounds goes back to the New Deal and before.

In fact, the first thing I thought of when I heard that Morris had said this was that it went back at least to Eleanor Roosevelt, an insight I owe that great political philosopher, Archie Bunker:

Well, let me tell you one thing about Richard E. Nixon. He knows how to keep his wife, Pat, home. Roosevelt could never do that with Eleanor. She was always out on the loose. Running around with the coloreds. Tellin' 'em they was gettin' the short end of the stick. She was the one who discovered the coloreds in this country; we never knew they was there! "All in the Family" Cousin Maude's Visit (1971)

I actually saw that when it aired in December 1971. [Watch it yourself on YouTube] It’s amazing how right Archie was about so many things, in spite of the combined efforts of actor, producer, director, and writers to make him look stupid.

However, for a more formal expression of this obvious truth, see this chart from page 106, of Why Americans Don't Join the Party: Race, Immigration, and the Failure (of Political Parties) to Engage the Electorate by Zoltan L. Hajnal & Taeku Lee. 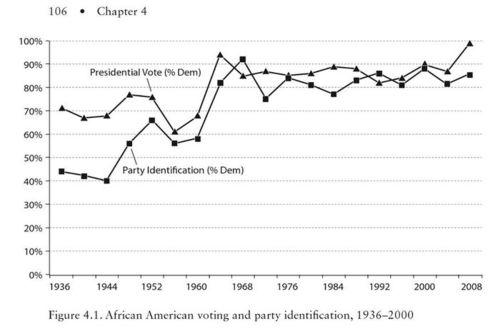 Hajnal and Lee say that

“Dire economic circumstances and the governmentally activist, economically redistributive, and politically egalitarian New Deal policies of Franklin D. Roosevelt created the pivotal conditions for a reconsideration of party allegiances into the Democratic Party.”

I knew that, Archie Bunker knew that, why doesn’t Dick Morris know that?

James Kirkpatrick wrote recently that “the Democrats have problems with whites too—indeed, since 1944 Democratic presidential candidates have only carried whites once, in the aberrational year of 1964.”

Hispanics, like blacks,  find the Democrats suit their economic interests, especially in terms of taxes, which transfer wealth from white taxpayers to minority tax consumers. They’re not likely to change that because Republicans support amnesty for the sake of the business lobby.

For people who want more actual numbers, there’s a PDF of Hajnal and Lee’s September 2006 paper Race, Immigration, and Political Independents in America online in PDF.