Mali Citizens Are Thrilled to Be Rid of Barbaric Sharia Law

Last spring a force of jihadists and Tuaregs swept through northern Mali and pushed out government forces. They then set about instituting Islam’s cruel sharia law, using punishments like public executions, amputations and floggings.

Jihadists began beating locals for smoking cigarettes and drinking alcohol. The Islamists bought children to be used as soldiers and stoned to death an unmarried couple. The sharia enforcers amputated hands of accused thieves.

This is the system of “justice” which Allah’s gangsters want to institute everywhere. The next time someone says that cultures are the same the world over, you can recommend a sharia vacation.

Malians therefore celebrated when the French army chased out the Muslim oppressors. They were happy to return to normal pursuits, like playing music which is a big part of Mali culture.

Timbuktu residents welcomed French and Malian troops for their liberation from 10 months of barbaric Islo-oppression. 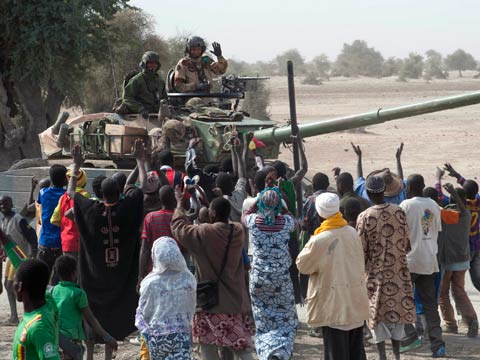 The BBC noted the relief felt by Malians:

Yacouba Toure and a couple of his friends have gathered around his crackling radio in Mali’s historic city of Timbuktu, soon after French-led troops captured it from militant Islamists.

They are sitting on the dusty steps of a hair salon, feet tapping to the rhythm of music.

“Music is a pleasure for us,” Mr Toure says.

“We can now dance and do whatever we want: We can walk together with women, we can shout, we’re the young people of Timbuktu, this is what we like doing.”

Music was banned under the strict Islamic law that militant Islamists imposed when they took over the ancient desert city last year.

The CBN sent a reporter to the Malian town of Gao to check on the changes.

North Africa is the newest hot spot in the fight against Islamic terrorism. The spread of radical Islamist groups has the United States and the West concerned it could become a base for terror networks.

That’s why French forces are in Mali, driving Islamic terrorists out of the northern towns they’ve occupied for more than a year.

Gao residents danced in the street, celebrating their town’s liberation from the intruders.

But their joy soon turned to anger, with Mali citizens looting Islamic police headquarters and lashing out against any sign of the 10 months of oppression they endured.

During that time, Islamists amputated the hands of two men for supporting the Malian government.

“Islamic police cut (off) my hand and showed it to the crowds,” one man said.

Another said, “Jihadis tortured me for three months before hacking my hand off in front of everyone.”

A fight against memories of Islamic oppression also played out in the streets of a newly liberated Timbuktu, where crowds of looters attacked shops once owned by the insurgents.

There are also many stories of torture in this town over the last 10 months, including public flogging.

“I wanted to die. It was better to die than to live through this,” Azahara, a flogging victim, said. “My brother was shot and killed by the rebels last week for breaking Islamic rules.”

With the rebels gone, France’s defense minister is calling its 3-week-old military operation in Mali a success.

Meanwhile, terrorists have taken shelter across North Africa after being pushed out of havens like Pakistan, Afghanistan, and Yemen.