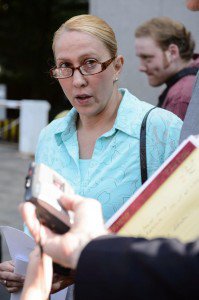 The New York Daily News has a story about NY State Assemblywoman Gabriela Rosa, a Dominican immigrant who got her Green Card and later citizenship by a fraudulent marriage to an American citizen.

“I married that person and it was not a real marriage,” Rosa told Judge Denise Cote. “I falsely got married with a U.S. citizen in order for me to regularize my immigration status and become a legal alien in this country.”

She downplayed her crimes.

“I didn’t get rich out of my position,” Rosa added. “I didn’t take any bribes. I didn’t do none of the things that usually you are very used to seeing in the other guys that get in this situation.”

Manhattan U.S. Attorney Preet Bharara said Rosa was able to run for elected office “only as a result of a years-long immigration fraud.”

There are a number of things about this Dominican immigrant/legislator/marriage fraudster story that are perfect: And finally For extra credit, she's not only accused of tax fraud, in addition to the whole thing, she's also

admitted to committing bankruptcy fraud and accepting an illegal campaign contribution of $1,000 from an unnamed “representative of a foreign government.”

Not only is the representative unnamed, so is the foreign government.