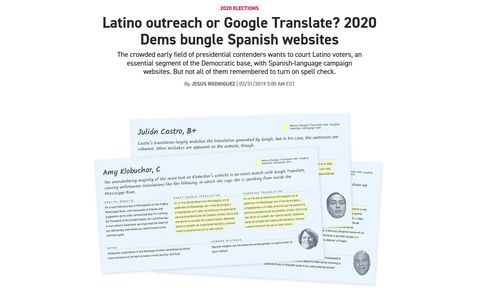 Why do so many candidates have Spanish-language websites when the language of political discourse in our country is English?

Well, many of them think they have to have Spanish websites or sections of websites.

The funny thing is, the Democrats with Spanish websites haven't been doing such a good job of it.

Using Google to translate English text into Spanish is a trick used by high school students to avoid doing their Spanish homework — not something you’d expect to see from candidates for the highest office in the land.

Yes, as a Spanish teacher myself, I know about Spanish students and  Google Translate.  They use Google Translate as a shortcut which prevents them from learning more about how to use the language. That's why it's bad for beginning students.

One student of mine thought he was getting ahead of the game by using Google Translate to write his Spanish assignment, not realizing that he was copying sentences in French!

Yet several Democratic White House hopefuls appear to be doing precisely that. They’re posting passages in Spanish on their websites that bear striking similarities to the output from Google’s translation service, appearing to perform only minor cleanup before publishing the copy on their sites. While Google Translate can serve as a workable starting point, more often than not it needs a human hand to produce Spanish that would pass muster with a native speaker.

Every campaign site that POLITICO reviewed had mistakes, ranging from minor typos to truly incomprehensible passages. The website of Minnesota Sen. Amy Klobuchar, posted shortly after her Feb. 20 announcement, addresses her mother using a masculine adjective. Sen. Kamala Harris at one point wrote that she had “wasted” her life defending American democracy. And Julián Castro’s website extolls the possibility of building an “América” that works for everyone, seemingly not realizing that he’s making promises about the entire American continent.

Then again, maybe Julian Castro is promising open borders to anybody in the Western Hemisphere. (See my previous Is It Wrong For Us To Call Ourselves Americans? )

The Spanish-language sites represent an effort by the Democratic candidates to court the burgeoning Latino electorate, estimated at 27 million by Voto Latino, a group that works to register Latino voters. But good intentions aside, the errors risk producing the opposite effect, prompting Spanish speakers to question how seriously the candidates are taking them if they can’t even get basic English-to-Spanish translation right.

“It's the front door to the campaign. And it's indicative,” said Lisa Navarrete, an adviser at UnidosUS, the oldest Latino advocacy organization in the United States. “If you're not investing in this … it will indicate to us that perhaps you're not taking the other parts of reaching out to the community as seriously.”

POLITICO’s review looked at everything from basic grammar, to use of idioms, to how closely the text aligned with the often-poor Google-generated translation. The candidates fell into three rough categories: top of their class, average performers and the truly struggling.

Three candidates, Pete Buttigieg, Andrew Yang and John Delaney, earned failing grades for not having Spanish websites at all, while Beto O’Rourke’s and Sen. Bernie Sanders’ websites were incomplete.

If you're interested, there is plenty more detailed information in the article. But for this blog entry, let's just skip to the end of it:

President Donald Trump is in a whole different category, and not a good one for Spanish speakers interested in his policies. He didn’t have a Spanish website during his 2016 campaign, and his official White House site doesn’t have one, either. Same goes for his reelection campaign.

One of the top Latinas in the administration, Helen Aguirre Ferré, explained the decision not to launch an official Spanish website last summer by saying, “As important as it would be to have something in Spanish language, I think by and large most of us actually do speak English to a great degree. And I would like to see something in Spanish language, but is it the most necessary thing that we need? I don’t think that it is.” About a month later, she left her position as director of media affairs.

An abrupt ending that is.